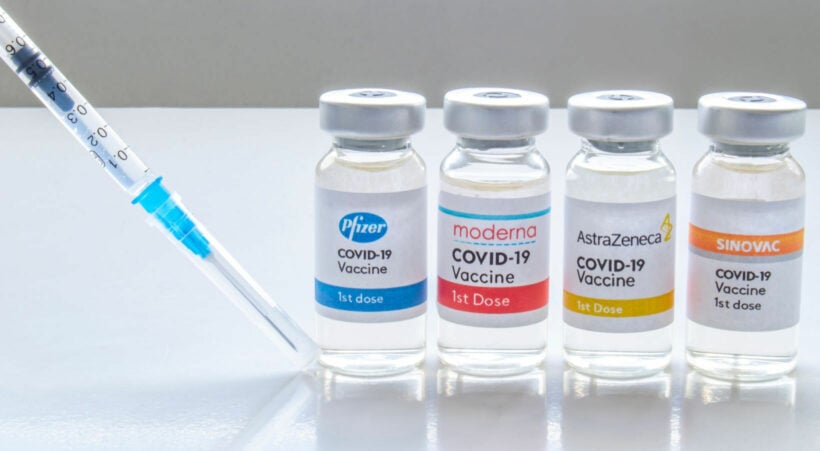 PHOTO: Vaccines are finally expected to be arriving into Thailand more quickly. (via Clinical Trials Arena)

A government spokesperson announced yesterday that between now and the end of October they intend to disperse 24 million Covid-19 vaccines as manufacturers are beginning to have more stock available for Thailand import. Thailand is now expected to receive total of 152.9 million vaccines by the end of this year to battle the Covid-19 pandemic, an amount that will cover 70% of the country’s population, 50 million people total.

Moderna and Sinopharm are expected to deliver vaccine shipments in October, with Moderna’s Spikevax branded vaccines expected to be available for purchase at private hospitals soon. The Thai Red Cross Society also plans on receiving the Moderna vaccines.

Among the priorities for some of the new vaccines flowing into Thailand are booster shots for those who have received two Sinovac vaccines already. Those doses were announced to officially be available from September 24. The government is launching the campaign to provide booster shots to the public, while nearly 900,000 third vaccines have been administered already, mostly to frontline workers and staff at medical facilities.

500,000 vaccines have been designated to be used as booster shots for those who have already had 2 vaccinations using the Chinese-made Sinovac vaccine that has been proven to be less effective against the Delta variant that is now the dominant strain in Thailand.

On October 4, the government will begin a similar drive for students and adolescents between 12 and 17 years old, with those younger recipients being administered Pfizer vaccines. A batch is expected to arrive by the end of the month of Pfizer’s Comirnity branded shots, with the government earmarking 4.8 million vaccines to be used for the student vaccinations programme.

Other demographics can expect vaccine coming soon with the announcement of 16.8 million more vaccines that have been designated for a variety of groups. Government agents and those in correctional facilities have been allotted 1.1 million vaccines, and workers insured with Social Security will have 800,000 vaccines set aside for them as well.