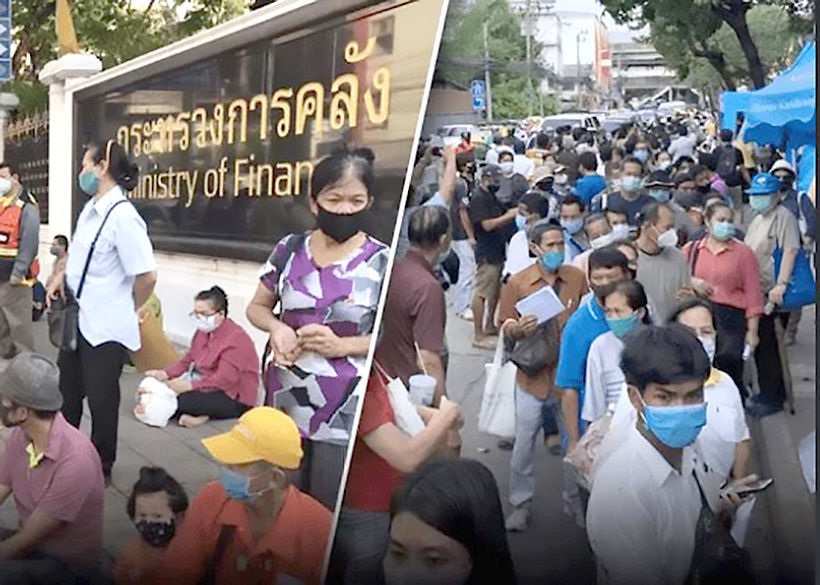 People began arriving before sunrise. It was around 5am on Friday that 49 year old Bawonlak Rasameebunsrisuk from Samut Prakan, just south of Bangkok, started the queue outside the Finance Ministry. She soon gave up her spot to 71 year old Gasorn Bunin, feeling sorry for the grandmother.

The Finance Ministry offices wouldn’t open until 9am.

All were hoping for the 5,000 baht relief cheque for “informal workers” promised by the Thai government weeks ago. Bawonlak said that she normally works in villages putting up advertising signs. She says she registered for the relief package on the first day, but the system said the registration was not complete, so she hoped that an officer could help her re-register and discover what the issue was.

Gasorn said she doesn’t know how to register online, but when she heard that the MOF was accepting complaints she came all the way from Suphan Buri province, more than a hundred kilometres away, to confront someone about her desperate situation. She stayed at her granddaughter’s home and left at 4am to join the queue. Gasorn works as a cook in Suphan Buri, but the restaurant was closed due to Covid-19 leaving her with no income.

54 year old Wasanpat waited in line with his 4 year old daughter but left before getting the chance to file a complaint. Wasanpat said there were too many people in the queue and he didn’t believe he’d get the 5,000 baht anyway. He’d worked as a driver and lived with his boss, until he was fired, and now has to find a new place to live with no income.

By 7am the line was already 500 metres long, according to Khaosod News. Officials expected about 400 people to file complaints, but at at 9am when the office opened the number was already up to 600. The Ministry called in about 80 more officers to help accept complaints after they realised at 10:30am that at least 1,000 people were waiting in line.

Of the more than 20 million who registered, not all were eligible and the number of persons receiving the 5,000 baht monthly aid package was limited to 16 million citizens. About 11 million have already received the relief, and officials will be reevaluating the information sent in for the other 5 million.