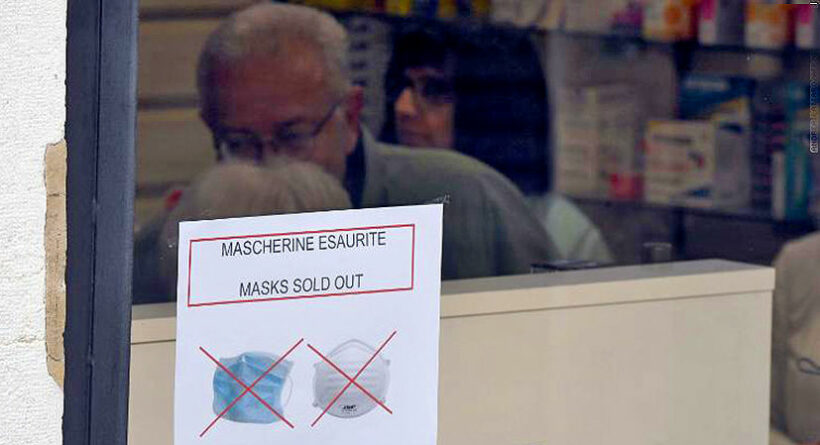 PHOTO: A sign outside a supermarket in Venice, Italy - Getty Images

The number of reported cases from the novel coronavirus (Covid-19) has risen to 80,150 across the world, resulting in 2,701 deaths. 27,595 people have recovered from the virus, the death rate is still hovering below 2%. The rate of new cases in China is starting to flatten while there are some new global hotspots outside of China, principally central South Korea and isolated areas in northern Italy. Iran has also registered 12 deaths out of a total of 60 cases.

Cases in Thailand remain at 35.

Europe’s biggest outbreak is now entered around northern Italy, where seven people have died and quarantine situations are being imposed on some municipalities in the cities of Veneto and Lombardy.

South Korea has announced 60 new cases in the past 24 hours, pushing the nationwide total to 893. More than 50% of the cases are associated with a religious Christian cult.

• US stocks have plunged today on mounting worries about the spread of the coronavirus outside China. The Dow Jones index finished down more than 1,000 points at Monday’s closing bell.

The Dow finished down 1,032 points, or 3.6%, its worst day in two years. It was only the third time in history that the index closed down by more than 1,000 points. The S&P500 followed suit. The Nasdaq Composite fell 3.7%, its worst performance since December 2018.

• In northern Italy there are now 231 confirmed cases of coronavirus. There are 101 hospitalised patients with symptoms and another 27 are in intensive care. At least 94 have been isolated in their homes. Seven people have died from coronavirus in Italy. The state of Lombardy, where most of the cases have appeared, borders Switzerland.

Tourist attractions in these areas have been closed, including festivities in the tourist hotspot Venice. Private meetings have been banned and schools have been shut. People inside some of these regions are being confined to their homes and told to avoid contact with others. The measures also include transport restrictions in some places and the surveillance and quarantine of individuals who may have been exposed to the virus.

• Canada has now confirmed its 11th case of the coronavirus. The national health minister and health officer for British Columbia say the affected person, a man in his 40s, was in close contact with a previously reported confirmed case.

“Both cases remain in isolation at home with support and monitoring from public health teams. The risk of spread of this virus within British Columbia continues to remain low at this time.”

In total, Canada has 11 total cases of confirmed coronavirus; four in Ontario and seven in British Columbia.

• The US and South Korea say they are considering scaling back joint military exercises due to a coronavirus outbreak in the central Korean peninsula.

The US Secretary of Defense Mark Esper says military commanders in South Korea are looking at scaling back the annual training exercises due to concerns about the coronavirus.”

He says that both countries remain confident and that South Korea will “remain fully ready to deal with any threats that we might face together.”

• The Chinese territory of Hong Kong and the island of Taiwan have reported new cases of novel coronavirus.

Meanwhile in Taiwan, officials confirmed two new cases of the virus, bringing the total to 30. The cases involve a man in his 40s and a woman in her 70s. They are both relatives of patients who contracted the virus earlier. The man also had a prior travel history to Guangzhou, southern China, in late January.