Most of the cases were detected in proactive case finding in Samut Sakhon and Bangkok, according to deputy spokesperson for the Ministry of Foreign Affairs Natapanu Nopakun, who also represents the CCSA.

“Active case finding will continue. We can expect the daily number of Covid cases to remain relatively high.”

The active case finding, primarily rolled out in Samut Sakhon, has led to an uptick in cases. Most of the cases detected though mass testing are asymptomatic.

“No cause for alarm. It reflects the efficiency of Thailand’s public health system in curbing the spread of the virus.”

109 cases were exposed to the virus when visiting high risk areas and were tested positive at a hospital or healthcare facility. 99 of those cases were in Samut Sakhon, including a 26 day old baby. 7 cases were in Bangkok and 2 in Samut Songkhram.

The other 17 cases were detected in quarantine for those arriving in Thailand from overseas.

A 68 year old Thai man in Samut Sakhon, who was in the end stage of kidney failure, died after testing positive for Covid-19. The man also had underlying conditions of diabetes. He developed a cough, runny nose and muscle ache on December 30 and tested positive for Covid-19 on January 7. He died yesterday.

The elderly with underlying health conditions are most at risk of dying from Covid-19, Natapanu says. 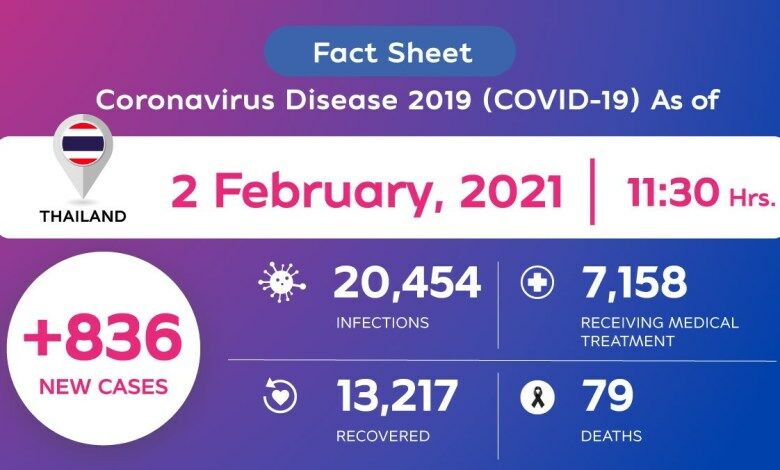 54 new Covid-19 cases and 1 death were reported today in the Centre for Covid-19 Situation Administration’s daily briefing. Thailand now has 515 active cases, a record low since the start of the new wave of Covid-19 infections. An enormous 1-day spike in cases was reported on December 20 with more than 500 cases among migrant workers at a Samut Sakhon fishing hub. The virus quickly spread to the majority of Thailand’s provinces.

The number of daily cases continues to be on a downward slope with Samut Sakhon now the only province classified as a “red zone” under maximum control.

Since the start of the pandemic, the CCSA has reported a total of 26,162 infections and 85 deaths. Out of the new cases reported today, 36 were exposed to the virus at areas considered to be at “high risk,” including 28 in Samut Sakhon, 2 in Bangkok, 1 in Nakhon Nayok, 1 in Pathum Thani and 1 in Chon Buri. Active case finding detected another 8 cases in Samut Sakhon. The other 10 cases were detected in quarantine for those entering Thailand from overseas.

A 63 year old Thai man in Bangkok died after testing positive for Covid-19. He had underlying conditions of diabetes and high blood pressure. On January 9, he developed symptoms of a cough, fatigue and difficulty breathing. He tested positive for Covid-19 that day. He was put on a ventilator on January 12. His symptoms worsened and he died on Sunday.

Active Covid-19 cases in Thailand as of 3 March 2021, according to Worldometers.

The Thai government is looking at offering free Covid‐19 vaccines to migrant workers who are covered under the nation’s social security program. The Thai Ministry of Labour is set to discuss the move with the Social Security Board. If approved, over 2.3 million migrant workers would be inoculated for free, costing around 3 billion baht. The Labour Minister says migrant manual labourers are vital to Thai industries and the economy, therefore, they should not be left out of the vaccination program.

Frontline medical personnel, people who have been working in close contact with the infected, elderly people, those suffering from congenital diseases and people in high-risk areas are to be the first recipients of the vaccines, which could be either from Sinovac or Astrazeneca. After the highrisk groups are inoculated, the general public will follow with some tourist heavy areas to see expat residents included in the vaccination programme.

The move to cover migrant workers comes after Thailand closed at least 7 natural borders with the neighouring country of Myanmar as thousands of Burmese people are expected to flee to Thailand following the military coup in Myanmar. The Thai immigration police chief says he estimates around 400,000 Burmese migrants are looking to enter Thailand. He says the bounty for human traffickers has increased due to the political situation in Myanmar.

Illegal migrants to Thailand have been accused of spreading the Covid virus as many allegedly snuck into the country undetected after bribing border patrol police officers. Those who illegally entered, skirted mandatory quarantines and testing. At least 33 police officers and other government officials were investigated for their roles in the illegal smuggling of migrant workers into Thailand.