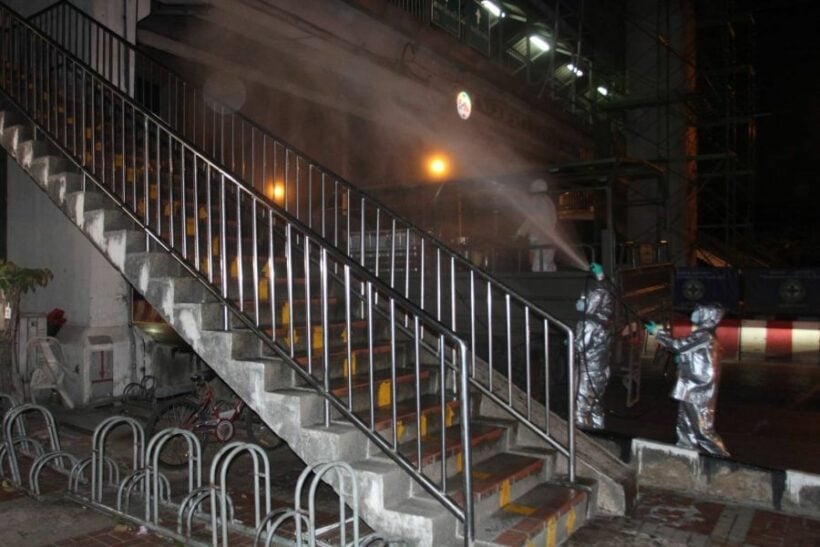 Bangkok’s legendary Lumphini Boxing Stadium, which became a local epicentre of many infections of the Covid-19 coronavirus, was sprayed down with disinfectants early this morning. Soldiers from the army’s Chemical Department began spraying overnight at the city’s Central Ramindra Department Store and finished at Lad Pla Khao intersection, focusing on handrails, stairs and bus stops, and any public areas which are at high risk for contagion.

The Ministry of Public Health revealed this week that a boxing event held at the stadium on March 9 was responsible for a sharp rise in the number of infections in Thailand. Among those who contracted the virus there was event host and actor Matthew “Deane” Chanthavanij, who revealed in a short video posted on Instagram that he was infected with Covid-19. His wife Sarunrat Visutthithada, also known as Lydia, also later tested positive for the virus.

ไม่ได้ล้อเล่นครับ เรื่องจริงครับผมใครที่สัมผัสผมในช่วงสามสี่วันที่ผ่านมาเฝ้าดูอาการนะครับ เดี๋ยวจะแจ้งรายละเอียดเพิ่มเติมหลังจากนี้ This is NOT a joke, for those that have been in close contact with me the last few days please take precautions I have the Covid -19 virus #covid19

The deputy director of the army’s Chemical Department says that after disinfecting the stadium, the team will move on tomorrow to Lat Phrao district, starting at Central East Ville department store.

“We will also discuss with Lat Phrao District Office to see if any areas need special focus for disinfection.”