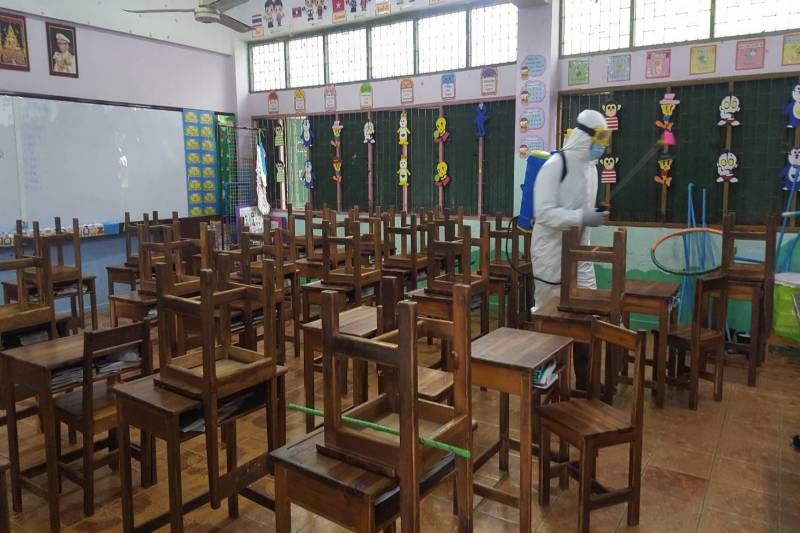 Another school near the Burmese border, along western Thailand provinces, temporarily closed down after students came in close contact with those who crossed the border and reported a “fever,” although no traces of the coronavirus have been detected or confirmed at this stage.

The Ban Kui School in Kanchanaburi closed after some of their students came in contact with people who crossed the Thai-Myanmar border. The province’s governor Jirakiat Phumsawat arranged for the school to be deep cleaned to prevent the possible spread of the virus.  The governor says closing the school for a few days to clean it was a precautionary measure.

While the virus hasn’t been detected, the neighbouring country’s climbing number of cases poses a concern. While official borders are closed, some people live near natural crossings, like jungles and rivers, and can easily go from Thailand to Myanmar. Myanmar had a spike in coronavirus cases, but most cases are along the country’s western coast, not near the Thailand border.

The governor says 3 so-called border residents, including a 1 year old child, had a fever and recently visited Myanmar. They tested negative for the coronavirus and the governor assures the public not to be overly concerned.

“The authorities had taken 3 cases of who reportedly had a fever, including a 20 year old male, 17 year old male, and a 1 year old child, to the state quarantine and to conduct a Covid-19 examination. They were border residents who had been in neighboring areas of Myanmar for more than 2 weeks and had not traveled to any place that was near the risk of infection.”

2 Prachuap Khiri Khan schools also temporarily closed after some of the school’s Burmese students and their parents crossed the border and 2 of the students reported a high fever.

Most of the cases in the recent spike in Myanmar involve the Rhakine state, on the other side of Myanmar from the Thai border. There has also been a high proportion of cases in the largest city, Yangon. But since the recent Myanmar outbreak, Thai authorities have ordered border officers to tighten patrols along the leaky borders as well as the official trade checkpoints.