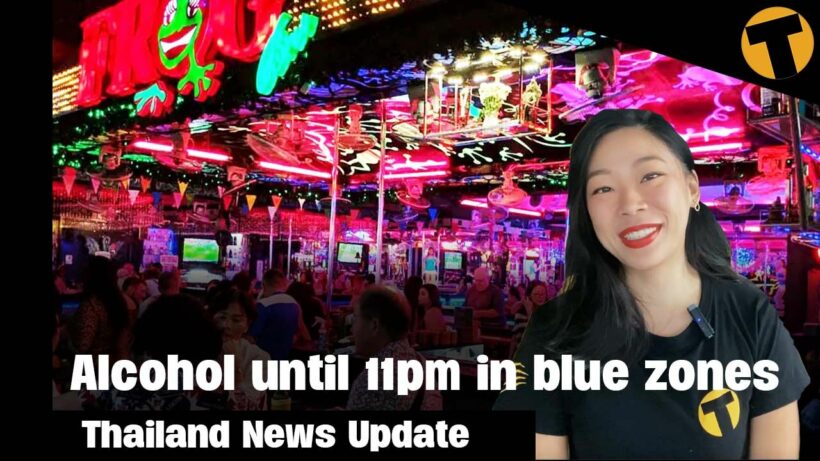 Put on your party shoes… from tonight you’ll be able to stay out a bit later for a drink. The easing of the alcohol ban for 8 Blue Zone provinces goes into effect today with restaurants and the growing number of ‘faux restaurants’ allowed to sell alcoholic drinks until 11 pm. Bars, pubs, karaoke, nightclubs, and other nightlife and entertainment venues are still not legally allowed to reopen in any part of Thailand for the time being.Blue zones include Bangkok, Chon Buri, Kanchanaburi, Krabi, Nonthaburi, Pathum Thani, Phang Nga, and Phuket.

Several areas and districts, including the area in Samut Prakan by the Suvarnabhumi Airport, are also designated as “blue” zones.The new relaxed rules for serving alcohol are applied to many types of food service venues including restaurants, food halls, street vendors, eateries, hotel dining facilities, and other food and beverage industries.

All types of businesses must meet either the Ministry of Tourism and Sports’ SHA+ certification or the Ministry of Public Health’s Thai Stop COVID 2 Plus standard as well as the government’s Covid Free Setting measures.

The restaurant loophole is still in full swing too, as any entertainment venues that are able to meet the required standards can open up a restaurant and serve alcohol, now until 11 pm. These makeshift “restaurants” must still meet the same certifications and requirements as all other food venues.

Yesterday’s provincial reports shows that the number of Covid infections around Bangkok and nearby provinces is again on the rise, with Phuket also presenting a large number of new cases each day. Bangkok reported 1,150 new infections yesterday with many of the inner provinces remaining high as well.

Phuket reported 412 new infections, with Con Buri reporting 394.With Covid infections on the rise in Bangkok again, the Bangkok Metropolitan Administration has launched a series of testing events in 80 communities around the city through the end of January.

The campaign is aimed at proactive testing to identify and hopefully contain clusters of infections as the highly contagious Omicron variant spreads quickly through the capital.The series of testing events began yesterday and will run through the end of the month, with testing facilities fanning out across the capital.

People will be tested with antigen test kits which return test results in about 30 minutes. Anyone who tests positive from the ATK will then be retested with an RT-PCR test for more reliable results.Anyone who did test positive will be categorised by the severity of their symptoms and then treated either at a hospital or field hospital for more severe cases or at community isolation centres or in home isolation for the more mild infections. There’s a full list of testing locations in the full article at thethaiger.com

With the reintroduction of the Test & Go program, that allows fully vaccinated people to enter Thailand with a Day1 and Day 5 PCR test, businesses in the tourism industry are hopeful for a more sustained growth in international travellers from February and beyond.
Test & Go was reinstated last Thursday for a kick off date of February 1.The new version of Test & Go was almost universally panned by tourists and travellers for added complications and cost, now requiring a second RT PCR test with a pre-booked hotel on the fifth day after arrival, and additional insurance requirements.

Inconvenient though it may be, it is generally a step up from the Sandbox programs that require a minimum of 7 pre-paid nights in an SHA+ hotel.Between 200,000 and 300,000 international travellers are predicted to arrive in Thailand next month, about the same as December last year, according to the head of the Thai Hotel Association.

She forecasts a steady rise in arriving tourists and is expecting even better numbers for March.The Thailand Tourism Board Association were equally bullish, but tempered their optimism with a warning that, as has been seen in the recent past, all hopes of upward momentum in tourism numbers can be curbed at the drop of a hat with yet another last-minute government change of mind.

Police in the western province of Kanchanaburi now believe that a man they took into custody is responsible for a brutal knife attack on two British men that resulted in one death.

On Saturday morning police found and arrested a 23 year old Thai man that they suspect was the assailant in the stabbing.New reporting reveal that Prasut Thipthep was arrested very nearby the crimes he’s alleged to have committed, when police found him just across the street from the house that had been rented by the two British men who were attacked.

He was said to be hiding in a room that belonged to a relative.It has been reported that the attacker has a history of mental health issues, with hospital records for previous problems. After the crime was committed, angry residents, believing he was responsible for the grisly murder, attacked and beat the suspect, such that he had to be sent to the hospital for treatment.

At this stage, he’s been charged with both murder and attempted murder.According to police, the two British men were playing loud music on a radio in front of their house after 3 am as they sat at a table drinking beers. They were surprised by a Thai man with a long sickle-shaped knife confronting them and attacking them.

According to the Annual Global Retirement Index 2022 by International Living, Thailand has ranked 11th out of 25 listed countries as the world’s most desirable places to retire this year.

When looking at destinations in Southeast Asia, Thailand was on top, followed by Cambodia, Malaysia, Bali and Vietnam coming in last regionally.

The index did not include Singapore.The so-called retirement visa in Thailand still has financial entry barriers, applicants are unable to work and they still have to perform 90 day reports to Immigration.

In Thailand at the moment, 35,846 foreigners have current retirement visas …. the top three nationalities are British, Germans and Americans.

Regionally, Malaysia’s longest-serving PM, 96 year old Mahathir Mohamad, has communicated with his family while in hospital, according to his daughter.

The elder statesman was admitted to hospital this weekend for the third time in just over a month. Local news also quoted an unnamed “closest source” as saying that the former leader’s condition remained stable and that he had regained consciousness and was able to speak.

And in a separate development, Malaysia’s King, Sultan Abdullah Ahmad Shah, was admitted into the same hospital on Saturday for a check-up and reported treatment on his knee and ankle.

Grant
Great news about extension of hours for Alcohol! But what is my gripe about no price reduction anywhere on Alcohol prices? Thaiger reported earlier last year about 50% reduction in Tax on Alcohol! Yet retailers have not lowered their prices…