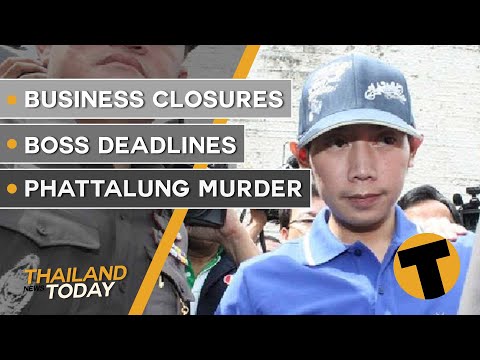 There might be another long weekend coming up soon. So much revenue was brought in from the recent 4 day holiday weekend earlier this month that some government officials think another couple days off could help give the slumped economy another shot in the arm.

The 4 day weekend earlier this month (a replacement for the annual Songkran holiday) circulated some 8.8 billion baht in revenue, according to the Tourism Authority of Thailand.

Deputy PM Wissanu Krea-ngam says the cabinet has talked about another holiday, most likely a 4 day long weekend again, and the idea has been passed on to PM Prayut Chan-o-cha. Wissanu says the long weekend might be scheduled for November, since there are no public holidays scheduled during that month.

A mother allegedly slashed her 3 year old daughter’s throat in Surat Thani’s Phun Phin district whilst she was sleeping at their rubber plantation home.

Police say they found the child dead on the mattress, soaked in blood. They say the child’s throat had a deep cut. The 43 year old mother has already admitted to the murder, according to police.

According to the woman’s husband, she had a panic attack the night before saying she was worried her daughters would be gang raped.

The man said he was sleeping in another bed and woke up to find his wife trying to cut her own throat. He quickly took away the knife but saw his 3 year old daughter laying in a pool of blood, and called the police.

The family moved from the Isaan province down to Surat Thani to work as rubber tappers. The family had three children.

A 20 year old Phatthalung man has been arrested over the killing of his 23 year old girlfriend.  The man allegedly smashed her head repeatedly, killing her because she said she wanted to break up with him.

Phatthalung Police say they receiving reports of a female corpse being found packed inside a cage outside a house in the north of the southern Thailand province. The body was found laying face down with critical injuries to the head. Police estimated the woman must have been killed at least 9 hours before.

Neighbours told police the couple had been quarrelling often but paid little attention because they were always fighting.

Natthapol initially denied being involved in the case but Police say he confessed to the assault after a long interrogation.

The coronavirus pandemic has led to a spike in business closures in Thailand, increasing nearly 40% since last year, and those numbers are expected to continue to go up.

Many of those businesses were in the tourism industry, leading to the highest unemployment rate in the past 10 years.

From June to July, business closures went up by 38.4% compared to numbers the same time last year, according to the Economic Intelligence Centre. Even worse, they expect higher numbers in the 2nd half of the year due to the economic decline brought on by the responses to the pandemic. As of mid-August, 13,400 businesses had already closed their doors.

While some people lost their jobs during the pandemic, many people faced lower work hours.

The government has set a 7-day deadline for state agencies whose officials are alleged to have been involved in the mishandling of the 2012 hit-and-run case involving the Red Bull heir Vorayuth “Boss” Yoovidhya to provide updates on their investigations.

Deputy Prime Minister Wissanu Krea-ngam says the Office of Public Sector Anti-Corruption Commission had not yet informed him of its progress but he understood it might not be able to meet the deadline given the scale of its probe. Audio recordings of investigators, Boss and his lawyers, have also surfaced and under investigation.

Other government agencies that must report back to the deputy PM include the Office of the Attorney-General, the Royal Thai Police, the National Anti-Corruption Commission, the Department of Special Investigation and the Lawyers Council of Thailand.

Boss, now 35, was driving the family’s silver Ferrari when it hit and killed a 47 year old police officer whilst he was riding his motorcycle on Sukhumvit Road in Thong Lor in the early hours of Sept 3, 2012. After the statute of limitations clock ran out on other charges, the most serious charge, reckless driving causing death, was dropped in July this year by the Office of the Attorney general, sparking widespread outrage and the broad investigation into the case.

As for Boss, he remains a fugitive living overseas.