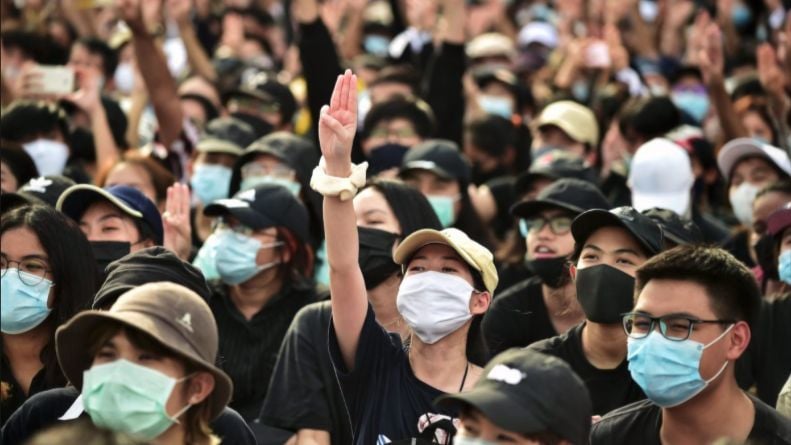 Negotiations continue between officials at Thammasat University’s Tha Prachan campus, police and organisers of this Saturday’s proposed anti-government protest rally. Last week the University denied permission for the students and other protest groups to hold the event on the grounds of the high-profile university. Today it was speculated that the rally could be moved to the nearby Sanam Luang park, the only other large space in the area auditable for such a large gathering.

It wouldn’t be lost on officials that the same Thammasat campus was the site of the 1976 student massacre and in close proximity of the Grand Palace. The incident ended up in a violent crackdown by Thai police and lynching by right-wing paramilitaries and bystanders against leftist protesters who had occupied Bangkok’s Thammasat University and the adjacent Sanam Luang, on October 6, 1976. The Thai PM has also stated that he intends to avoid violence “at all costs”.

Meanwhile, the government says they’re prepared to handle any influx of ‘up country’ protesters who are travelling to Bangkok to join the anti-government demonstration.

Deputy PM Prawit Wongsuwon says that he’d been informed by intelligence agencies how many protesters would be coming and from which provinces. Asked about security checks and weapons checks conducted during the event, Prawit noted that authorities “were already doing their jobs”.

“You can be sure we can handle the situation.”

Protest organisers were predicting that 50,000 people would attend the event, a marked increase on the estimated 10,000 that turned up at the last large-scale anti-government event held at the Democracy Monument in August. Police are concerned that, if the university doesn’t allow the protest to be held on the campus grounds, it will produce a potential security and safety nightmare.

Yesterday the Thai PM made it clear that he wanted police to avoid any violent clashes at all costs. He also asked police not to intervene if the protesters fulfilled their promise to march on Government House at the end of the Thammasat campus rally.

Speaking about a report that the demonstrators could be allowed to use the adjacent Sanam Luang, Gen Prawit responded… “everything must come under the frame of the law”.

“Everything must be done according to the law, to prevent clashes.”

At this stage, that permission has not been sought although it would certainly be an option for officials as they try and steer a course between avoiding public clashes on Bangkok’s streets and satisfying the needs of a large group of protesters.