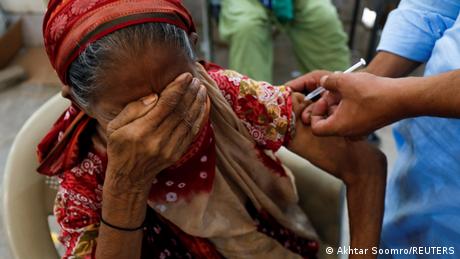 Laiba Zainab, a 25-year-old journalist in Pakistan’s central city of Multan, was eager to receive a shot of China’s Sinopharm COVID vaccine on June 10, after spending five months waiting for her age group to be called.

Pakistan’s vaccination drive got off to a bumpy startearlier this year, beset by lack of supply and vaccine hesitancy. In February, only senior citizens were eligible to receive a shot. But last month, driven by an influx of Chinese vaccines, Pakistan started a mass vaccination campaign for all adults.

The process is organized through an online registration system. When a dose is available, recipients receive a text message code, and go to one of 2,000 mass vaccination centers across the country.

“When the government announced the registration to vaccinate citizens aged 18 years or older, I sent messages every day, and sometimes two or three times a day” said Zainab, adding that it took several weeks before she got her appointment.

As South Asia has experienced a surge in cases in previous months, Zainab said she was alarmed and getting vaccinated was a priority.

“The vaccination process was smooth and it took 20 minutes,” she said. “I urge people to get vaccinated, and I am sharing my experience on social media to bust myths about vaccination,” she added.

Zainab is now among nearly 13 million people, out of a total population of 230 million, who have received a vaccine. Her second dose is scheduled for early July.

“We have seen a steady increase in the rates of daily vaccination, crossing 400,000 doses per day. We do hope for a further increase to well over half a million doses a day,” Pakistani Health Minister Faisal Sultan, told DW.

Fareeha Irfan, a public health physician and expert in health policy and management, told DW that the Pakistani government has streamlined access to vaccinations, and the public has responded well.

“The number of cases has significantly dropped,” Irfan said.

“Now the government is offering a drive-through vaccination facility which will make it easier for the public to come for vaccination,” she added.

The number of COVID cases in Pakistan has drastically decreased in the past few weeks. On Monday, 660 new cases were registered and 25 deaths were reported, the lowest numbers in the past eight months.

The government target is to vaccinate 70 million persons by the end of 2021, according to the health minister.

However, since last week, Pakistan has seen a temporary shortage of doses, and there is concern second shots could be delayed.

Zainab is hopeful for her second dose in July, but she fears some delays due to lack of supply.

Scores of people in the eastern city of Lahore on Monday protested a shortage of AstraZeneca doses.

“Procurement is competitive and it needs financing, but with a struggling economy, it is difficult to purchase an abundance of doses,” said public health expert Irfan.

Qamar Cheema, an Islamabad-based public health analyst, told DW that the “government has made sufficient arrangements but it lacks timely procurement of the vaccine and supplies.”

“There is also the problem of lack of trust in the health system and Chinese vaccines. The government must buy all kinds of vaccines because Europeans and the West stress that only those who are vaccinated with Pfizer, AstraZeneca, Moderna or Johnson&Johnson vaccines will be allowed to travel to Europe.”

“We made an agreement to procure 13 million doses of Pfizer vaccine. We have also started partial production within Pakistan of a Chinese vaccine,” he added.

Pakistan has a history of anti-vaccine propaganda and myths linked with polio vaccination, which has been erroneously associated with fertility issues and Western conspiracies.

The same hurdles are now being seen among Pakistanis who mistakenly believe the COVID vaccine will negatively impact their health and allow monitoring from Western countries.

“The purpose of sharing my experiences and photographs on social media was to raise awareness and motivate people for vaccination,” said Zainab.

Health Minister Sultan said that the government is debunking vaccine myths “through extensive engagement and communication on various channels.”

“We will also use encouragement via incentives and by reaching out to various sectors like education, chambers of commerce, commercial and government employers to increase reach. We also are increasing access by taking the vaccines as close to people as possible,” he added.

However, many health experts say Pakistani authorities could have done a better job at the early stage of the pandemic.

“We have not educated people well about COVID. People have not taken it seriously and they need to take preventive measures to tackle the virus,” said Irfan.

“The majority of the people have not taken the virus seriously unless they themselves and their families got infected. We should engage community leaders to make people more aware,” she added.