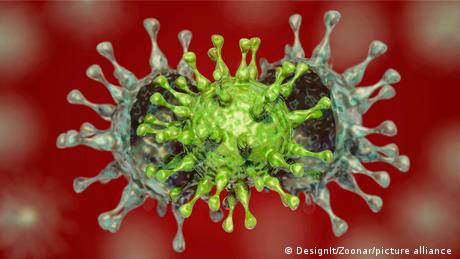 Though Africa currently has fewer cases of COVID-19 than Europe, experts fear there will be more waves as only about 7% of the continent’s 1.3 billion inhabitants are fully vaccinated.

Most African countries depend on vaccine doses from abroad, even if there are efforts to build up local production centers. But, as the number of cases rises in Europe, supplies to Africa will likely suffer. Germany, for example, has already made a decision to retain vaccine doses that were destined for poorer countries. “We have even postponed some of our COVAX donations, international BioNTech donations, from December to January and February so that there will be enough doses in Germany,” Health Minister Jens Spahn said this week.

His words came just a few days after World Health Organization (WHO) head Tedros Adhanom Ghebreyesus criticized certain countries for stockpiling vaccines. “Every day, there are six times more boosters administered globally than primary doses in low-income countries,” he said. “This is a scandal that must stop now.”

The nonprofit ONE Campaign has called for the German government to reverse its decision and to continue to give doses to COVAX as pledged. “If we don’t move fast to ensure that people all over the world have access to vaccines, we will be prolonging the pandemic visibly,” ONE Germany director Stephan Exo-Kreischer told DW, before describing Spahn’s decision as a “huge mistake and a devastating signal to the world regarding Germany’s dependency.” Furthermore, he argued, Germany had bought more doses than it needs.

The Health Ministry told DW that Germany was providing a total of 100 million free doses to be distributed mainly via COVAX. According to the ministry, the government has invested €2.2 billion ($2.5 billion) into speeding up the development, production and distribution of tests and materials, including €1.6 billion for the COVAX program.

Despite the low vaccination rates, there is currently a downward trend in new COVID-19 cases in Africa. The Africa Centres for Disease Control and Prevention has registered a total of 8.5 million cases, of which over 222,000 were fatal. But Exo-Kreischer believs these numbers were probably erroneous: “We have to assume that fewer than 15% of cases on the continent are actually detected. Even if the numbers seem low on paper, the WHO estimates that they are seven times higher.”

He said a lack of good qualitative data was the issue, pointing out that South Africa had low rates, whereas infections in Tanzania have not been recorded in a systematic way.

“The good record regarding infection rates is actually related to the fact that there is too little testing and reporting,” said Wolfgang Preiser, from South Africa’s Stellenbosch University. But he said it was possible to make estimates from excess mortality data: “In South Africa, three times more people have died of COVID-19 than has been reported officially.”

“I think that we will only be presented with the bill in years to come,” he said, before pointing out that other illnesses were also being neglected because of the pandemic.

Only 23% of South Africa’s 59 million inhabitants are vaccinated, and there are almost 3 million cases at the moment.

There are enough doses, as opposed to in most African countries, where there are shortages, but “the biggest challenge is actually vaccinating people: There are more doses than can be used, like in industrialized countries.”

Preiser said that there were also anti-vaccination groups in South Africa, who tended to be white, wealthy and educated, but skeptical of the government.

In neighboring Zimbabwe, the government has said that the pandemic is under control and only a few new cases and deaths have been reported recently.

Botswana is also doing reasonably well. At the height of a coronavirus spike in the summer, it bought in large quantities of vaccine and launched a major rollout.

According to the country’s COVID taskforce, some 56% of the population has now received a first shot and 29% have already had their second. The most recent numbers show 31 cases per 100,000 and 2,416 deaths. Moreover, there are reportedly very few anti-vaxxers, which experts attribute to a general trust in the stable government and the health-care system.

Mauritania, which has been designated a “champion” by the WHO is also making great efforts to inoculate the population. “We knew that we would not be able to cope with the social and economic consequences of a hard lockdown,” Health Minister Sidi Ould Zahaf recently told the German daily Süddeutsche Zeitung. But for the moment, only 13% of the population has received two shots, so there is still a long way to go.

In the rest of the continent, the situation is much worse: In 30 countries, less than 10% of the population is vaccinated.

This article was translated from German.