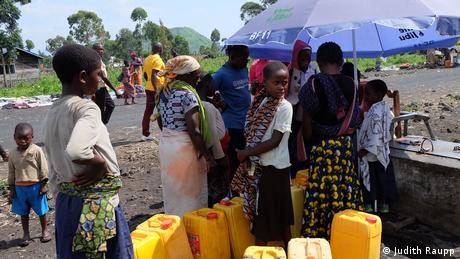 The Democratic Republic of Congo (DRC) holds half of the fresh water reserves of the entire African continent, according to UNICEF. But not even half of the Congolese population has access to clean drinking water.

Entrepreneur Jack Kahorha didn’t want to accept that. So, four years ago, he and two friends founded the water company Yme Jibu in Goma, the capital of DRC’s North Kivu province.

Yme Jibu serves 83,000 people on the outskirts of Goma, a city of over 1 million. Next year, the number of locals benefiting from the clean water his company distributes is expected to reach 140,000.

The company pumps water from Lake Kivu, treats it with chlorine, then passes it on to households and community faucets in the city districts.

There, mainly girls and women fill the water into jerrycans and carry them home on their backs. Yme Jibu generates two-thirds of its $400,000 (€355,000) turnover from the faucet business.

This is because a private connection to the water supply costs $860 — considered too expensive for most Congolese.

In the eastern part of the country, the population is particularly poor because conflict and arbitrariness slow down efforts to achieve prosperity.

Yme Jibu employs a staff of 22 and cooperates with 440 water traders who operate the faucets and reservoirs in the districts.

Kahorha had to convince customers to pay for water. That’s because the company emerged from aid projects.

When the Nyiragongo volcano erupted in 2002, a Norwegian organization built wells, faucets and pipelines to supply people who had fled the city and lost their homes to the lava. After that, farmers fleeing militia fighters came to the camps.

For more than 15 years, aid organizations provided free drinking water to the refugees and residents who lived near the camps.

But an abrupt end loomed, Kahorha recounted: “In 2016, all donors decided to stop providing funds because the emergency was declared to be over and the camps were closed. There was the risk that people will no longer have access to drinking water.”

Many projects end up in ruins as aid budgets dwindle.

Former diplomat and Africa expert Volker Seitz recalled conversations with international donors. They estimated that only one-fifth of the projects in African countries provided the population with a long-term benefit.

Statistics on this are lacking because the long-term impact is rarely evaluated. But Kahorha’s experience confirmed problems with the sustainability of several water projects:

“Many communities are not trained enough to maintain facilities. That is why they do not work in the long run. I think the donors would be heartbroken if they saw that they had spentmillions and had almost nothing left behind.”

Yme Jibu is a different story. Since the company received its facilities as donations from aid organizations, it has modernized and expanded infrastructure.

Drinking water is reasonably affordable for the poor population. A 20-liter jerrycan costs 100 francs to fill.

Households connected to the network pay 4,000 francs ($2.00, €1.78) per cubic meter. Schools, hospitals and orphanages pay half that amount.

Congolese shareholders invested a total of $500,000.

Initially, a European investor participated. But cultural differences and disputes over the repayment terms of the borrowed capital led to a falling-out. Since then, Kahorha and his two Congolese partners each own about a third of the company.

They have taken out bank loans for this purpose.

Kahorha described the company’s relationships with the aid organizations — which are numerous in eastern Congo — as “good”.

Oxfam, for example, is paying for the vending machines from which the population will be able to fetch water with a cash card in the future.

Yme Jibu is negotiating with another organization to see if it can help build new pipes and faucets. This is because the Nyiragongo erupted again in May, prompting many residents to move away from the city center. Kahorha is therefore preparing for new customers:

“People are building like crazy in the area where we are represented. We need to prepare for a rush of potential customers.”