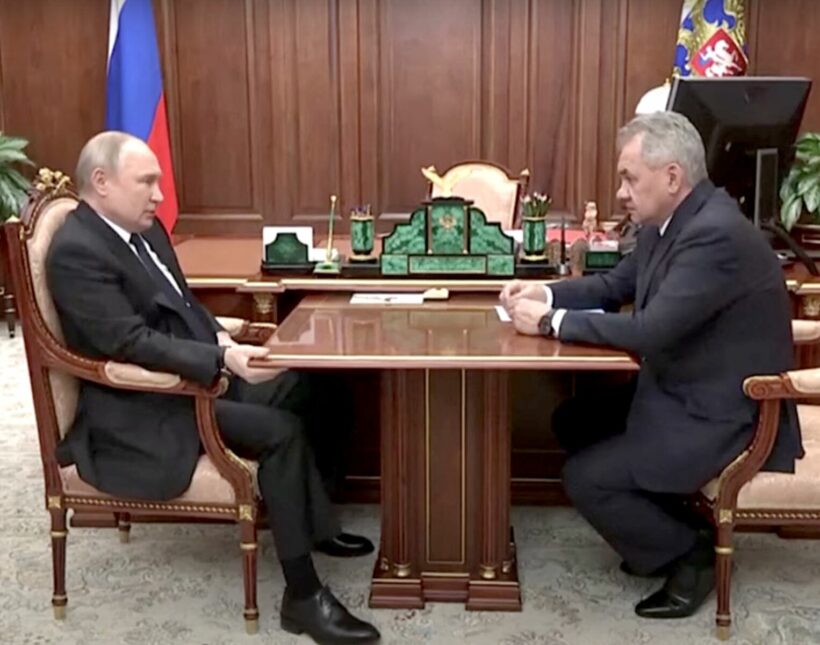 Russian leader Vladimir Putin squirms in his chair as he sits at a noticeably smaller table to speak with his defence minister Sergei Shoigu regarding his offensive in Mariupol. Putin was earlier shown speaking with his generals and other world leaders at an awkwardly long table. Credit: Kremlin via France 24 | YouTube

Russian President Vladimir Putin has claimed victory in the port city of Mariupol in southeastern Ukraine. He declared it “liberated” despite more than a thousand civilians and Ukrainian troops still inside a massive steel plant.

Winning the largest battle in the war in Ukraine is the type of moral victory the Russian leader wants to deliver on the eve of Orthodox Easter. But the US swiftly disputed the claim, saying Ukrainian forces still controlled areas of the city.

Rather than engaging in what might have been another costly conflict, Putin has commanded his troops to blockade the city’s Azovstal plant, which covers some 6.4 square kilometres of ground, beneath which more than a thousand civilians are said to be sheltering in tunnels, basements and bomb shelters.

After issuing an ultimatum to Ukrainian troops at the plant to surrender or die, Putin resolved to blockade the complex instead.

“There’s no need to climb into these catacombs and crawl underground through these industrial facilities… Block off this industrial area so that not even a fly can get through.”

Ukrainian officials have pleaded for help to evacuate their soldiers and civilians from the industrial complex, which has been under constant bombardment with no route for escape or resupply for weeks.

One of the Ukrainian defenders from the Azov regiment, Capt. Svyatoslav Palamar, says Mariupol was and will stay Ukrainian.

“I always say that as long as we are here, Mariupol remains under control of Ukraine.”

Speaking with the BBC, Palamar confirmed that Ukrainian troops have “enough” ammunitions to repel Russian attacks. However, they are in desperate need of medical supplies to treat the nearly 500 wounded soldiers who are literally rotting from severe wounds and required major operations such as amputation. Many elderly people who are sheltering in the steelworks likewise lack necessary medications.

Palamar said civilians are sheltering in separate locations apart from soldiers, in basements containing 80-100 people each. It’s unclear how many civilians there are now, as some buildings have been destroyed and Ukrainian troops have been unable to reach them due to Russian shelling. Meanwhile, the entryways to some bunkers have been blocked by slabs of fallen concrete, which required heavy machinery to remove.

“All the buildings in the territory of Azovstal are practically destroyed. They drop heavy bombs, bunker-busting bombs which cause huge destruction. We have wounded and dead inside the bunkers. Some civilians remain trapped under the collapsed buildings.”

Putin earlier congratulated Russian troops and his defense minister in a televised meeting at the Kremlin on Thursday, saying they had “successfully completed the combat effort to liberate Mariupol.”

An estimated 40,000+ civilians, or 5% of the city’s population of 400,000 people, have been killed in indiscriminate Russian bombing and shelling of residential buildings. The city has literally been razed to the ground.

In his nightly address on Facebook, Ukraine’s President Volodymyr Zelensky said Putin was trying to boost morale and “at least talk about some victories” and progress of Russian troops, such as mobilising tactical groups of a new battalion.

“They can only postpone the inevitable – the time when the invaders will have to leave our territory, including from Mariupol, a city that continues to resist Russia, regardless of what the occupiers say.”

Ukrainian officials also said Putin didn’t want to waste any more resources in a final battle with the remaining Ukrainian hold outs, as he’d rather send his troops somewhere else, namely the Donbas region.