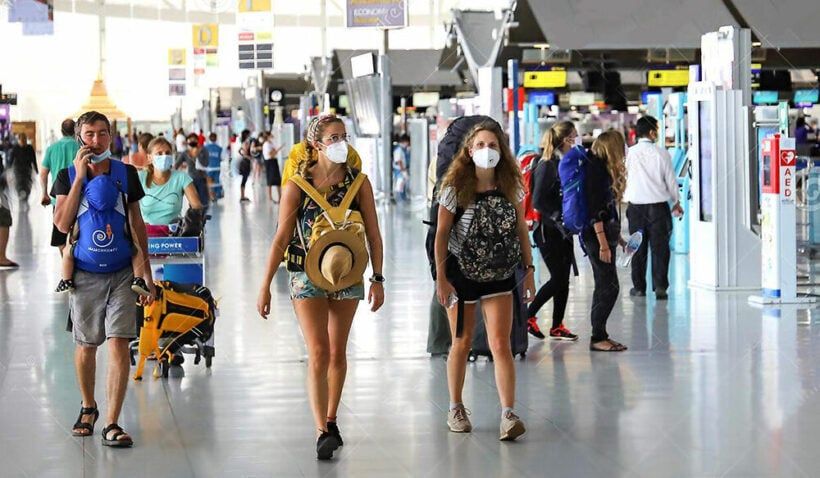 The CCSA has announced that starting April 1, travellers arriving in Thailand from abroad won’t have to take pre-arrival Covid-19 tests (before they travel to Thailand). The scrapping of pre-arrival tests will also apply to Hat Yai airport, in addition to the current Suvarnabhumi, Don Mueang, Phuket, Krabi, Samui, Chiang Mai and U-tapao airports. A CCSA spokesman said the CCSA hopes to expand it to all airports, depending on their readiness.

Visitors must still take RT-PCR tests once they arrive in Thailand. Under the Test & Go and Sandbox schemes, visitors must also still take antigen self-tests (ATK) five days after arriving, monitored at their hotels. International arrivals must also still have Covid-19 insurance coverage of at least US$20,000. There was a proposal during the week to reduce that to US$10,000, but it didn’t happen. The spokesman said the required amount of insurance will likely be reduced later, though.

Starting April 1, visitors will be able to arrive by land through Satun province in the South, and by sea through Surat Thani ports. Sea travellers are already currently allowed to arrive through Phuket and Chon Buri. Phuket’s first sea tourists, a group of four Indonesians, arrived on a yacht last week. Sea tourists under Test & Go take an RC-PCR test for Covid-19, and isolate on the ship until they get their results.

The CCSA spokesman said the lifting of pre-departure tests applies to all visitors, whether arriving by Test & Go, Sandbox or quarantine channels.

For a full breakdown of everything announced, or not announced, at yesterday’s bi-monthly CCSA meeting, click HERE.

Leo
Annoying small steps....scrap the self-test 5 days later and make it mandatory on day 1, instead of the (expensive and time consuming) PCR test. That will do away with the 1-night quarantine also (yes, the hotels that gave some kickbacks…
Alavan
5 hours ago, Marc26 said: But so many countries are just doing away with the pre-arrival at this time Canada is doing away with the same date, April 1st So Thailand is inline with a lot of countries in that…
Marc26
5 hours ago, Alavan said: Other countries ask a test before flying, not after you arrived. I have no problem at all taking a test 48/72 hours before flying, limiting the chances of getting covid during the flight, but where…
brownronin
17 hours ago, Marc26 said: So many countries are just doing away with it right now Believe me, I'd rather it not be there also It looks like they may scrap a lot of it May 1 I land Aprl…
Marc26
4 hours ago, brownronin said: I was in the same position last month as i arrived on the 25th, just missing the removal of the 5th day pcr and quarantine, :- \ . The cost and hassle aside though (and…