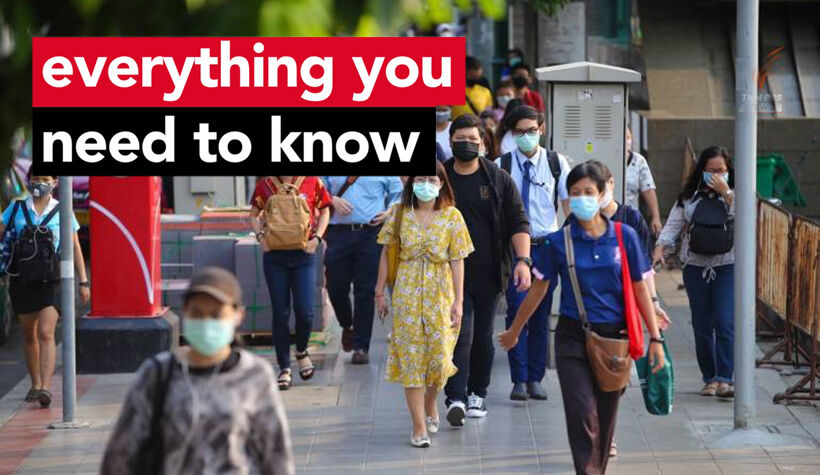 Strap in for the tortuous journey towards Thailand’s opening up without the Covid red tape – a four month trip where the country’s long list of confusing and sometimes conflicting restrictions will slowly be binned. But even when we get to July, if all goes to plan (it rarely does), we will still face a number of lingering questions about the survival of the Thailand Pass and treatment of foreigners who test positive for Covid.

Even after yesterday’s CCSA announcements, the major impediments to travelling to Thailand remain – pre-paid PCR test and 1 night of accommodation when you arrive, wearing masks, limitations on closure times for bars (ahem… ‘restaurants) and the whole ‘Thailand Pass’ pre-registration farago.

Any urgency to re-open the Thai borders with fewer, or no restrictions, due to the rest of the region rushing to reboot their battered tourist industries, seems lost on the Thai government which have maintained a ‘steady as she goes’ policy, wrapped up in plenty of red-tape. Bottomline, local tourism operators and hotels have at least another 4 months of pain ahead, compounded by the loss of the Russian tourism market, rising fuel prices (air fares) and inflation.

• For the Sandbox program, from April 1, where you had in the past been required to stay in a designated district (eg. Phuket) for 7 days, will now be reduced to a 5 day stay in the area before you can then travel freely around Thailand.

• For full quarantine, from April 1, if you are unvaccinated, you will now only need to do a maximum of 5 days, down from the current 7 days.

• From May 1, you will only be required to take a supervised ATK on arrival (wither at the airport or designated venue), so no PCR test or compulsory SHA+ hotel stay for the first night.

• All entertainment venues will remain officially shut. Dr. Taweesin advised operators to convert them into eateries under the Covid Free Setting measures (this is the ‘loophole’ that bars and night venues have been using to re-open at this time). Many bars, especially in the popular tourist and local zones, have clearly re-opened but have to go through the hassles of getting the ‘faux restaurant’ accreditation.

• No mention of relaxing rules, specified under the Emergency Decree, about the wearing of masks. In reality, people are starting to disregard the rules on mask-wearing at bars and club gatherings, but are still wearing them in public spaces and on the streets during the days. (The Thaiger would recommend foreign visitors follow the lead of the locals in this regard and be vigilant about wearing a face-mask if Thai people around you are wearing their masks. It is unlikely you would be ‘arrested’ or fined for not wearing a face-mask but the locals will certainly appreciate your co-operation as a visitor in their country)

NONE of these initiatives have been rubber-stamped and posted in the Royal Gazette, but that is considered a formality and you can expect yesterday’s announcements to become reality from April 1.

But just to throw a bit of confusion into the mix yesterday, the Ministry of Foreign Affairs spokesperson Natapanu Nopakun, said that the changes to the pre-arrival PCR test were being ‘considered’.

This differed from the Thai-langauge spokesperson who said that the CCSA had confirmed the change. But just about all media are announcing the pre-arrival changes as a ‘done deal’.

The road to ‘endemic’

Thailand plans to declare Covid-19 an endemic by July 1 and has laid out a plan to focus on reducing infection rates and coronavirus-related deaths by swift and accessible medical treatment, as well as by accelerating the rollout of booster dose vaccines, particularly to the elderly and ‘at risk’.

To prepare for the transition to an endemic, the Thai government has laid out phases, starting with the “Combatting Stage” from now until early April.

From April to May, Thai officials say it will be the “Plateau Stage”, with hopes that the number of new Covid-19 infections will remain steady, with no spikes in infection rates. The last stage would be the “Declining Stage,” with a drop in infection and death rates, before going into the “Post-Pandemic Stage” where Covid-19 is considered an endemic.

The spokesperson says treatment for Covid-19 patients needs to be “swift and accessible” to hit a fatality rate of 0.1% or lower. He added that booster vaccine doses will need to hit 60% of the population, with a high percentage of the elderly inoculated with the third dose.

“From July 1 onward, hopefully, and if all goes well and the numbers and situation go as planned, we hope that we will be transitioning into an endemic.”

The next month (mid-March to mid-April) will also be critical in determining how the plan moves forward as Songkran, the Thai New Year from April 13 to 15, has posed a risk for Covid-19 transmission as many go home to visit families and participate in water splashing activities. The Thai government has decided to ban the massive water fights that Thailand has become internationally known for as a precaution to prevent the spread of Covid-19.

Restrictions are easing across Thailand, especially in Chiang Mai. The northern province is now fully open to international tourism and can welcome travellers entering under the Test & Go and Sandbox schemes. Restaurants in Chiang Mai can also serve alcohol until 11pm.

A number of provinces have been reclassified on the Thai government’s colour-coded zoning scale based on local Covid-19 infection rates. The majority of provinces in Thailand are classified as “yellow” zones with less stringent measures than “orange” zones. 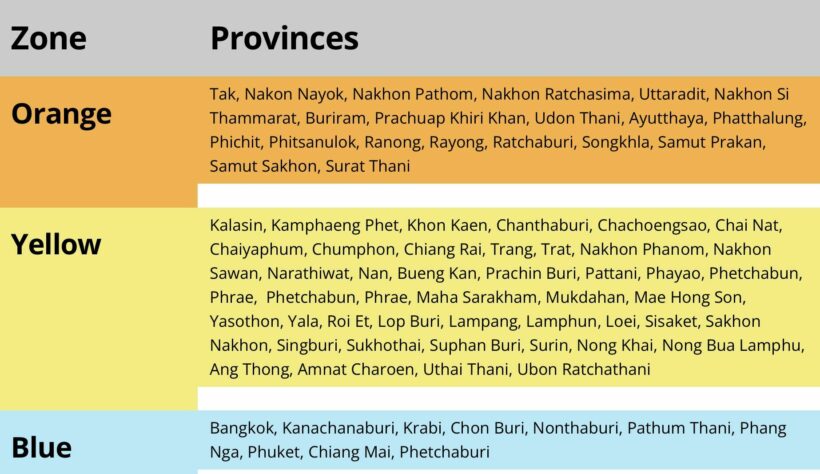 Chiang Mai and Petchaburi have been reclassified as “blue” zones to allow international tourism. Chiang Mai has had five districts approved to welcome overseas tourists, and local officials have been pushing for the entire province to be open to travellers.

In orange zones, alcohol sales at restaurants are still prohibited and gatherings are also limited to 500 people. In yellow zones, restaurants can serve alcoholic beverages until 11pm.

Thailand’s State of Emergency will remain in effect and has been extended for another two months, giving the government the same powers it has used to tackle the outbreak through its establishment of a Covid-19 task force, the Centre for Covid-19 Situation Administration, aka. CCSA. The decree was extended from April 1 to May 31.

In explaining the extension, Thai PM Prayut Chan-o-cha says Covid-19 is “still a pandemic and there needs to be careful consideration and evaluation before transitioning to an endemic phase”.

In past discussions, the government has considered ending the decree, but ending the decree would dissolve the CCSA. Officials have been considering more permanent measures to essentially replace the emergency decree as well as form a government body to handle the Covid-19 situation and other public health emergencies in the future.

Not so much the elephant in the room, but the squeaky mouse. The so-called BA 2,2 variant has been identified in Thailand (four confirmed cases), after being discovered in Hong Kong. But The WHO and international Covid authorities are yet to identify the strain as a Variant Of Concern. Along with ‘DeltaCron‘, BA2.2 remains an annoying sub-story… The Thaiger will keep an eye on any change in the situation of these reported variants.

BobbyJJ1
Maybe I'll take a look into returning to Thailand in 2023 or 2024, but for now, my money will go to countries that actually want it. Cambodia, Vietnam, and the Philippines seem to want it. Thailand? Who knows?

Benroon
On 3/19/2022 at 9:26 AM, JJJ said: It’s obvious the government has no interest in supporting tourism businesses or nightlife establishments. Say hello to the 2022 recession. The junta has been anti bar/nightlife since the first day they forcibly took…

Benroon
22 hours ago, LoongFred said: I don't agree. The protest should be the travelers or airlines responsibility. The test on arrival because controlled by ther Thai health department needs to stay. The only thing I'd add is that with Thai…
Marvin
The reality is the Thai government is going to have to dig down deep and come to grips that COVID is not going anywhere. Weather they open their borders easing the entry process or not I hope they at least…

Faz
The topic was about reduced changes in restrictions from April 1st, which has long passed. A member with his own agenda attempted to change the topic to vaccine effectiveness. All posts have been removed and topic closed. There is a…