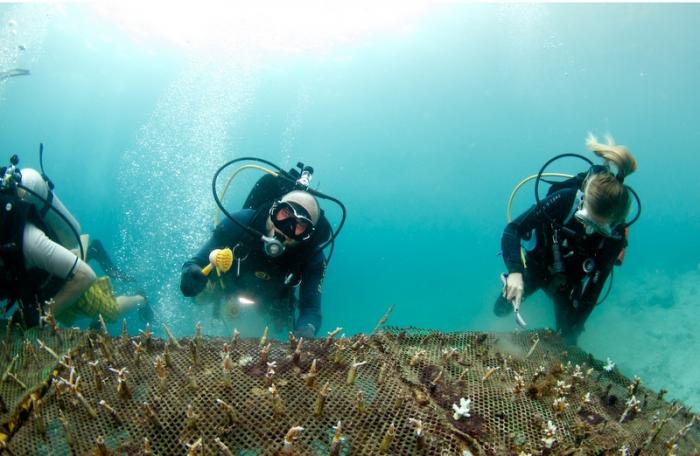 PHUKET: Though irreparable damage has been done to many of the reef systems along the Andaman, especially those near major tourist destinations such as Phuket, dive sites in the region continue to offer extraordinary experiences to rookie and veteran divers.

Within the Phi Phi archipelago, a popular day-trip destination for dive companies out of Phuket, as well as those based on Phi Phi Don, the local community is coming together to protect and rebuild marine systems.

In honor of Her Majesty Queen Sirikit’s 84th birthday on August 12, hundreds of volunteers came together to clean Phi Phi’s beaches and reefs while promoting environmentally sustainable practices and awareness.

“To release the anemonefish safely we used wire cages, which were placed over the anemones as a temporary measure to prevent larger fish from feeding on the young clownfish,” said Mr Hewett.

Mr Hewett admitted that animal releases, which are common during Buddhist holidays and as public relations stunts by large companies in Phuket, are less likely to have an immediate impact on the ecology of the reefs.

“However, it is my belief that the more frequently local communities participate in projects such as this, the more aware they become of the fragility of coral reefs,” Mr Hewett said.

“By reducing the destruction of coastal resources we may give the coral reefs and marine diversity an opportunity to recover to a point of self sustainability.”

In addition to the animal release, a team of divers moved a three-ton mooring that had been installed too close to an artificial reef, threatening to damage what it was placed there to protect.

Once the fish were out of the bags – so to speak – the mooring moved and the underwater cleanup at Saam Hart complete, the dive teams returned to Tonsai Bay to clean up under the pier.

“We removed a ton of rubbish in less than two hours,” said Mr Hewett.

But there is always more trash in the sea.

The diving communities along the Andaman coast must continue to bolster their efforts to self-educate, as well as educate the local communities on how to protect the wonders just below the surface.

Law, Life and Society: The real cost of incarceration