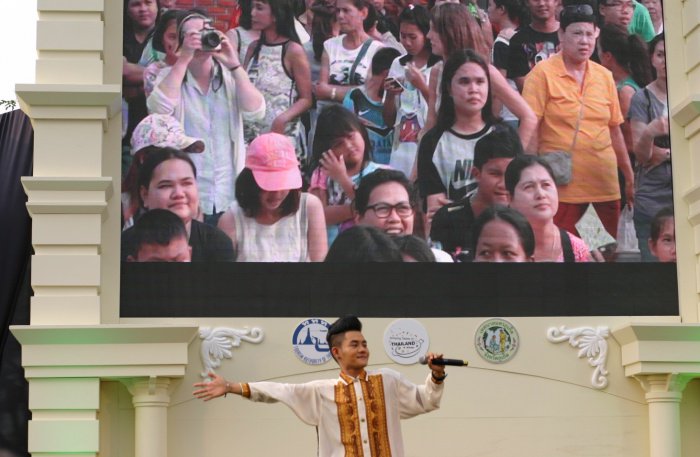 PHUKET: Food was aplenty when the Tourism Authority of Thailand’s (TAT) ‘Amazing Tastes of Thailand’ rolled through Phuket and onto Thalang Road in Phuket Town late last month.

The fair, part of the TAT’s ‘Discover Thainess 2015’ campaign and an effort to bring locals and tourists together, panned out well as the streets were packed full of excited and hungry people.

Comprised of vendors with styles of food from four regions of Thailand, the street was closed off for performances and presentations by local companies, such as Pura Organic, as well as participation by celebrities, such as Iron Chef Thailand’s Chumpol Jaengprai and Bunn Borriboon.

Food offered included somtam, kanom jeen, varieties of different meats, along with veggies, fruits and sweets from the north, northeast, south and central Thailand, allowing many guests to enjoy food from their home provinces.

Thachana Prathumwan from season 1 of The Voice Thailand swooned the crowd with western and Thai pop songs, while the Iron Chefs cooked up fantastic, innovative dishes using Phuket’s famed lobster.

Also on stage was a fantastically funny food competition between two foreigners and a Thai chef as the chef attempted to teach them how to cook and then compared his dish to theirs.

Martin Smetsers from Phuket’s own Pura Organic later joined the stage to demonstrate the company’s slow juicing process while talking about the benefits of an organic diet.

Tables were set up along the street for people to enjoy the food and festivities with the beautiful backdrop of Queen Sirikit Park as the sun set.

All in all, this food fair was a beautiful way to combine tourists’ interest in authentic Thai food and locals’ love of cooking and sharing their cuisine.

If you missed out on the great event, don’t fret, as Anoma Wongyai, director of the TAT Phuket Office confirmed that this will now be an annual event on the island.