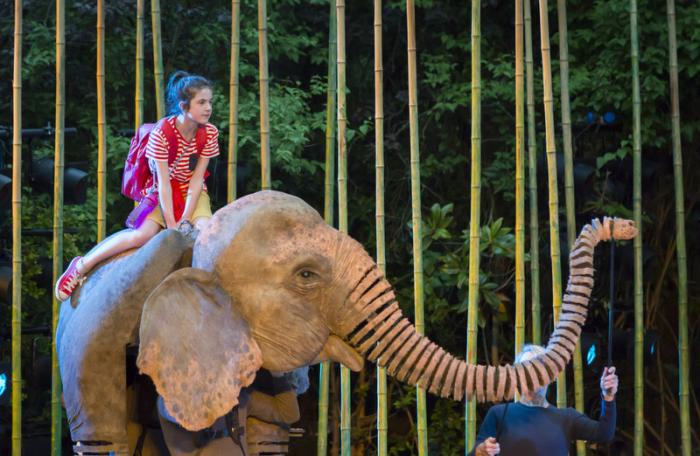 The play is set during the Indian Ocean tsunami that struck Phuket, and devastated large areas in Southeast Asia more than a decade ago.

A cast of more than 50 exceptional young performers came together in Samuel Anderson’s adaptation of Michael Morpurgo’s 2009 novel ‘Running Wild’.

The novel is inspired by the story of an eight-year-old British schoolgirl named Amber Owen, who was visiting Phuket with her mother and stepfather when the tsunami hit the island in 2004.

Ms Owen was riding on the back of a baby elephant named ‘Ning Nong‘. She said that the animal became alert and alarmed before the ruthless waves came crashing in.

“People were going into the sea to pick up fish, but the elephant kept trying to get away,” Ms Owen told The Telegraph. “I didn’t know what a tsunami was, but he could clearly sense there was danger.”

Ning Nong then ran toward high ground – with Ms Owen on its back – until the waves subsided, protecting her from being carried off to sea.

“As the water came in, I was safely on his back. He saved my life,” Ms Owen added.

Ms Owen was safely reunited with her mother, who reportedly pledged to donate money to Ning Nong’s upkeep every year, as a show of gratitude for saving her daughter’s life.

Earlier this month, Ning Nong was found at an elephant camp in Kanchanaburi, after being sold to a new owner after the tsunami, reportedly because her old owner found her too expensive to maintain. She now has a new name – Bai Tong – but is still the same gentle and friendly creature she was before, and still a favorite with locals and visitors to the camp.

Mr Morpurgo, a Children’s Laureate and best-selling author, based his novel in Indonesia, where a young boy named Will is on holiday with his family, and whose life is saved in a similar fashion by an elephant named Oona.

The protagonist of the play alternates between Lilly (played by Ava Potter), and Joshua Fernandes and Tyler Osborne (who share the role of Will). A team of skilled puppeteers maneuver the prop elephant and other animals that Lilly (or Will, depending on which performance you watch) meets on her adventures.

Following the success of his novel, Mr Morpurgo was first approached by Chichester Festival for permission to adapt his novel for stage. After a successful run there, the Regent’s Park Open Air Theater staged a production in London this month.

Mr Morpurgo’s other works include the 1982 novel War Horse which also focuses on the bond between a young boy and a horse during the war torn backdrop of World War I. He has also written dozens of other plays, novels and poems for children.

Ms Owen, who is now 20 years old, lives and works in Milton Keynes. She was aware that a children’s book had been inspired by her adventures in Phuket, but had never met Mr Morpurgo. The author had never contacted the young girl either – he had merely read about her island adventures in a newspaper clipping, and decided to base his novel on the incident.

In fact, there was never any contact or personal interaction between the two, until The Telegraph interviewed Ms Owen. Mr Morpurgo subsequently invited Ms Owen and her family to watch the adapted performance of his novel at Regent’s Park.

The performance moved audiences to tears, with both adults and children mesmerized by this tale of courage, survival and indomitable spirit in the face of adversity.

Blazing Saddles: When in Phuket, do as Brisbane does