Please ensure that you are properly licensed and wear a helmet anytime you hire or ride a motorbike in South East Asia.

Whenever you visit South East Asia one thing becomes immediately apparent – the economies would never survive without the ubiquitous 110cc step-thru motorbikes. Some may have bigger engines, some might have been ‘modified’ and some might have been cared for more than others. But without the ever-present ‘scooters’ it’s doubtful that most of the these economies would survive. Indeed many small businesses are invariably powered with this four-stroke assistance in countries like Thailand, Malaysia, Indonesia, Vietnam, Myanmar, Laos, Cambodia and The Philippines.

Where many more developed economies have moved to the ‘family car’ to do the shopping and daily school-runs, the family motorcycle is quite capable of doing some of the same jobs with not just one or two passengers; sometime up to FIVE on one small motorbike, plus the family dog as well. For expats living, or tourists visiting, the sights and sounds (and sometimes the smells) of the swarms of motorbikes can be overwhelming.

In places like Thailand the horns don’t get used very much whilst in Vietnam the symphony or motorbike horns is a constant soundtrack in the country’s biggest cities. And then there are those brave souls that will actually venture onto one of these two-stroke beasties – the expats that want to get into the local groove or the tourists that rent one (in most cases having never ridden a motorbike in their home country).

For most expats and tourists the first tentative steps into motorbike traffic is an onslaught on the senses. Or terrifying, or maybe even exhilarating. And dangerous. Every country has its own motorbike traffic rhythm and you need to get into the swing of the local traffic flow quickly to avoid a nasty and sudden introduction to the road surface. You learn very quickly that tar and human skin don’t mix well – the tar always wins. If you want an analogy I would say the best lesson to learn is to treat the motorbike traffic like a school of fishes. Swim with the fishes and you will do a lot better than trying to drive defensively. 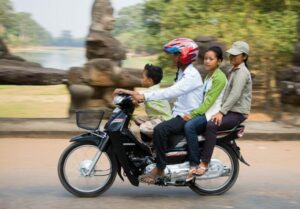 Honda has been the world’s largest manufacturer of the scooter since 1955. Production peaked in 1985 when Honda produced three million motorbikes. That annual figure has dropped dramatically partly, we suspect because most of those 1985 models are still on the roads of South East Asia. The step-thru motorbikes built in Thailand are tough as nails. Really tough. Although they can look quite fancy with the colourful fibreglass fairings, underneath they’re mostly the same. Steel tubing with an almost unbreakable four-stroke engine and, these day, really slick automatic transmissions.

There are some famous examples of people putting these machines to the test – dropping them off buildings, driving them off piers into the sea, running them on cooking oil – most of these bikes are tougher than the Terminator and just as difficult to kill off. I suspect that most of them have never had their oil changed – they just keep going!

And when you consider that a shiny new ‘scooter’ will cost less than US$1200, you have to ask how they can possible produce these magic machines for the price. So if you are brave and want to jump on one of these motorbikes (we’re assuming you’re a newbie) here’s a few tips. Firstly, in most countries you will actually need a motorbike license to ride legally, including Thailand.

Certainly, if you fall off, you’ll end up with a costly hospital bill as your travel or health insurance won’t cover you without a valid license – your International Drivers License for a car may secure your rental but not your insurance. Secondly, go for a test run on a quiet road, if you can find one. Get familiar with the acceleration and braking of your bike. Lastly, enjoy yourself as you ‘swim with the fishes’, wear a helmet every time and consider how much quicker you can get from A to B than all the cars that are stuck in the traffic whilst you drive around them and get to where you’re going.

The 110cc step-thru is going to remain a constant part of the micro-economies of South East Asia for the foreseeable future. Although passenger cars are growing in popularity as the rise of the middle classes demands, the scooters will remain the four-stroke engine of the South East Asia economies for a few more decades yet. 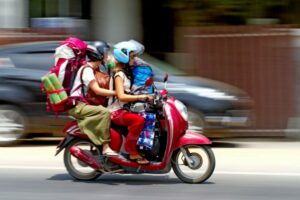