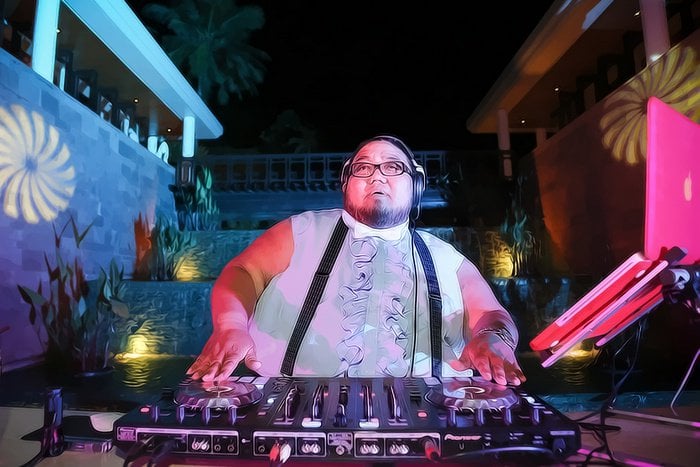 PHUKET: One of the island’s most beloved residents, Tom Saharut Somsanuk, perhaps more well known as ‘DJ Tank’, has been taking it easy after a health scare in April, but now he is all juiced up, ready to rock and raring to come back – harder, better, faster, stronger – to the Phuket party scene.

With a larger-than-life personality and a taste in music which ranges from funky Motown, to 80s pop, to house music and classic rock, you can catch Tom over the radio waves from the 89.75FM studio, mixing beats at a swanky island event or getting the party started at a destination wedding.

Tom took it back to the beginning during a casual chat over Indian food with the Phuket Gazette, crediting his success in these different sectors of the music industry to a mix of an American upbringing – he was born in Washington, DC, and raised in Virginia – and Thai heritage.

“I’m like a turtle – an amphibious being. I have a foot in each world. It gives me an edge. It allows me to have more empathy so that I can feel out both sides and find the middle,” Tom explains.

Tom brought experience as a bouncer and a DJ in the States to Bangkok, where he got his feet wet working festivals and small parties before moving on to bigger gigs, including one at the ‘party house of the stars’, Q Bar in Soi Sukhumvit 11, in the early 2000s.

“The reason I have survived until now is because I do things on the fly. I already know a lot of the songs I play – I know the feel. I play music to fish around and find out what you all are into,” Tom says, with a bit of an east-coast American twang.

“I throw songs out to get reactions. Are there heads bopping, toes tapping, finger snapping? These are indicators for me. I go from there. I try to get you out of your chair.

“This is something a good DJ or a good musician can do. This is why they are paid well. They take time to research people. It’s always about people.”

A few years after Tom made it big in Bangkok, the 2004 Boxing Day Tsunami struck Phuket’s shores. Tom came down to the island to take part in a tsunami relief festival. At about that time, something changed for Tom.

“I just wasn’t sure what to do anymore,” he says.

In walked Tom’s friend Oscar Chitamitre, bringing with him an opportunity to test the waters as a radio DJ on the island.

“[When going to check out the station] I was the canary in the coal mine. I liked it. I told Oscar, ‘You have to come with me… So he did,” says Tom.

Flash forward seven years, and Tom is now a well-known and sought after wedding DJ with Patong club scene experience and a new day job as a DJ on Radio Trip on 89.75FM.

“Weddings are the most challenging things I’ve ever done,” he says. “But [performing at weddings] is like being part of a large life cycle of entertainment.

“Kids from the UK, Australia, they come here as backpackers. Maybe they meet someone and make a connection. How many of these people end up dating, getting serious, wanting to have their wedding in Thailand?

“They bring their families here [for the wedding]. Then, later, they come with kids. Then they may come to renew their vows. Maybe some of them retire here. They go through different life stages and still love Phuket.

“You get to be a part of some of these times in their life. It’s a neat glimpse into someone’s world. We sometimes forget where we live – it’s paradise.”

“I love Phuket because I have learned a bit more about myself since I got here. Thailand is the place for discoverers, adventurers, refugees. I am one of the refugees. I am discovering my place in the world,” he says.

“I am discovering what I can do, what I would like to do. I am trying to figure out what I want to do when I grow up – even though I am already grown up.”

However, there are a few things Tom has already discovered he can – and cannot – do.

“I can’t sell, create, cook, evoke the same amazing feelings as I can by laying down a tapestry of music. I build a sound environment that makes everyone so happy and so in love and so in the moment that they feel like they are out of their body,” he says.

“It’s a magical time. You can do that with different things – like an amazing piece of poetry or a decadent chocolate. I have been able to do this with music.

“I never thought I could do that, that it would be something to do.”

Looking back: Gambling through the decades

On Deck: Economic benefits of regattas