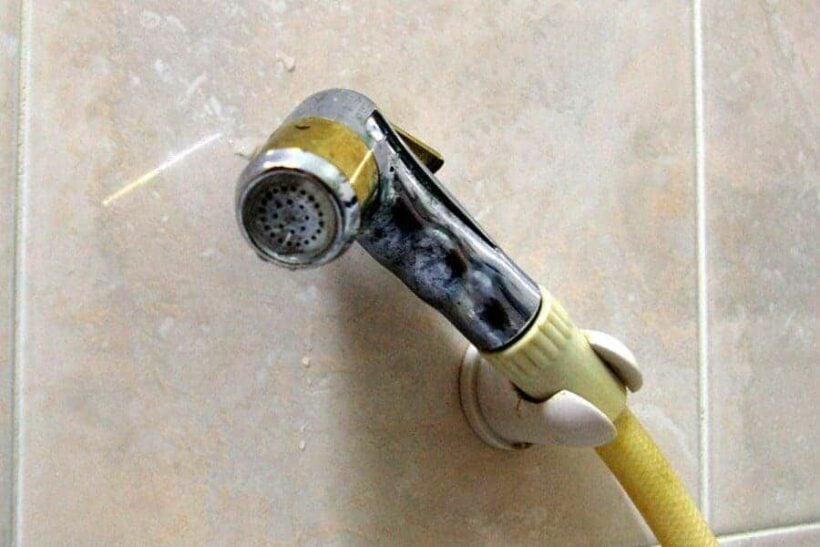 So the results are out. When asked the big question, respondents favoured Thailand (and Asia’s) ubiquitous ‘bum gun’ over toilet paper.

Full article below, but here are some of the reader responses from today’s The Thaiger YouTube survey. WARNING: Plentiful euphemisms for ‘bottom’ ahead. But first, the final result…

• “Bum guns – best things ever! Bum gun to clean, TP to dry. Does a much better job and gentler, esp being re-plumbed (post cancer). I’ve already included them in the design of my new place.” – Mark

• “I can’t believe I lived 60 years using toilet tissue without having learned about bum guns. And I can’t believe 30% of the people responding to this survey still chose tissue. Bum gums – a mark of civilization” – Martin

• “Bum Guns. A great invention indeed! I suffered from gout since I was a teenager. Which caused acute Diarrhea even when you were not having an actual ‘attack’, but the medication required for acute gout attacks sent it into overdrive. The (uric) acid of gout was really bad for the ‘nipping gear’, leaving it red raw, and using paper made it a helluva lot worse, absolute bloody miserable torture. Difficult to walk! Bum Guns were very alien to an Australian Native, but I changed over to using the bum gun here years ago. Best thing I ever did! And although my gout mysteriously disappeared about 10 years ago, which I don’t know how or why it did, I still use the Bum Gun. It’s clean, hygenic and effective. Chalk one up for the Thais!” – Russell Graystone

• “Loved the bum gun when I was in Thailand. Came back to the US, just in time for the pandemic, and there were so many shortages of TP. I bought me a bum gun, but sadly my apartment would not allow it to be installed. Something about liability if there were a leak — which makes zero sense. Now I am moving in a house in a few weeks and taking my un-used appliance with me in hopes of installing it there.” – Beverly Weber

• “My mother in law installed one in her house in Canada, after she found out my husband (who is Thai) and I were coming for a visit. Turns out it’s not quite as pleasant to use there. Arse pucker aplenty, when the ice cold water hits your nether regions. 😬😁” – Nadine Jackson

• “Born and raised and from a lineage of over a thousand years of washing and drying the bunghole. If your bits are clean they are more likely to get some random TLC!” – GODMUTHA GAMING

• “At the farm we have low water pressure and a good squeeze on the trigger is required. When we moved to a new house first time on the mains bum gun and using the same technique! Surprised I’m still here!” – D Procter

• “Once you master the knack of the bum gun it’s far more effective than TP, and more hygienic.” – Ken Lizzio

• “I find it strange that most of the world is still using the “Stoneage way” of cleaning!!” – harry viking

• “Bum gun then toilet paper….best of both worlds.” – kurt stuart

• “Honestly though you take a shower to clean your body, why do we (westerners) use paper to clean the pooper 🤷‍♂️🤔” – West Tx Greg

• “Bum gun of course. But times when public bum gun’s water force scares the shite out of you lMOA.” – Y F X

• “Someone else calls it arse blaster! I thought it was just me.” – tw25rw

• “To be environmentally friendly should use a bum gun initially and then dried with a small towel.” – Stephen Tyas

• “Bum gun to clean, paper to dry, anything else is just barbaric, I’ve installed a BG where ever I’ve lived for the last 20 years, it just can’t be beaten.” – Les Green

• “You wouldn’t think the bum gun is the answer if you lived in Maine. The water is damn cold here.” – Rick Moody

• “Bum guns are one of my favorite things about Thailand! I really wish they would install them in the US. After so many years of living here, it is hard to do without when I am in the US.” – Ruth Erickson

• “If I had some poop somewhere else on my body, I would never think I was clean enough if I wiped it away with some paper. Back in farangland I now use wet wipes after my nature calls, given the lack of “bun guns”. – Niklas Paulsson

• I’m afraid to touch a bum gun in a hotel, it’s likely covered in invisible faeces particles. I’d only use one if I had one at home that only I had used, ever”. – PLM

• “Septic tank. My partner’s house does not have mains drainage, hence toilet paper is not allowed.” – Argonaut

• “What are consequences of blasting bacteria infested water into rectum?” – Wil Rose

• “Never used one before. Don’t you need tissue after your arse is all wet from the gun. Lol.” – robert maddelena

• “For those who get constipated in Thailand, BG for sure. Shifts eerything.” – Maxine B

Life’s important questions… Is there a God, Honda vs Toyota, bum-guns (aka. arse-blasters) vs toilet paper.

It’s a cultural shock either way. If you’re an Asian travelling to the west you may be left pondering what happened to the water gun, usually found casually hanging on the wall next to the toilet. Or if you’re a westerner heading to Asia, you’ll wonder what in earth that water gun is.

In the west they not only use toilet paper exclusively, it’s often patterned (why?!).

Asian people, generally, have been happily washing their nether regions after Number 1s (ladies) and Number 2s forever. Why hasn’t the West caught on? Millions of westerners have now discovered the unbridled joy of a quick squirt down below in Asian countries but appear to left the secret behind. Yes, there’s bidets in some countries but the Asian bum guns usually provide a full mains pressure solution, and not just a polite squirt.

In Japan the bidet has been taken to a higher art form, deserving of a full mini-series.

Bum Gun vs Toilet Paper, which is better for your butt? | News by Thaiger

So which is better for your bum, butt, rear, rump, tush, arse, bottom or buttocks?

Some enterprising scientists have done the research and the bum-gun comes up the winner (some people get all the good jobs). An American rectal surgeon in New York, Dr Evan Goldstein, told a squeamish audience at ButtCon (basically Comic-Con, but all about bottoms instead of comics) that a squirt with water is actually a much better way to clean yourself after going the toilet.

WARNING: Now it starts getting a bit gross.

Asians already know that using toilet tissue after defecating basically means you will simply smear that faecal matter around, without actually cleaning the area. If you’re eating a low-roughage diet the problem becomes worse.

Washing with water will thoroughly clean the area of any trace of faeces. A bit of well-aimed water pressure for a few seconds will do a much, much better job than a few metres of patterned toilet paper! Finishing the spray-job with a quick wipe of tissue paper will then leave your backside feeling cleaner and fresher after every poop!

So, next time you’re reaching behind and having a quick squirt (please aim carefully), you’ll feel better knowing that your backside, and the environment, is probably happier with the end result.

Either way, always wash your hands after the performance is over.

Skip
There's a lot to be said for "a picture is better than a thousand words"... can someone please demonstrate the proper "bum gun" technique so I can take advantage of the "guns" installed in my new house... please
Tim_Melb
14 hours ago, Rookiescot said: You should ask an ex British soldier how you can wipe your bottom using only a single sheet of "British Rail" toilet roll. Doesn't that involve tearing a piece from the centre of the sheet…
MrNovax
On 4/5/2022 at 8:23 AM, Poolie said: A few? How many khazis have you got? 🤯 Two bathrooms, two bum guns