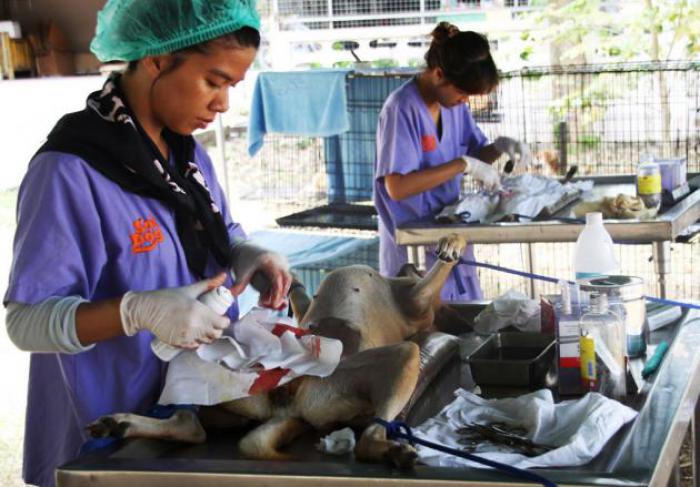 PHUKET: The Soi Dog Foundation has completed a campaign to sterilize stray dogs in every area of Phuket with the aim of creating a healthy, sustainable canine population on the island. The program was completed last week, the foundation said.

With cooperation from the province’s local authorities, the Soi Dog Foundation has sterilized and vaccinated more than 15,000 dogs and 2,000-plus cats on the island during the two years of its mobile clinic program, thus preventing them from reproducing and protecting them from rabies.

The mobile clinic, which started in June 2012, is a part of the foundation’s effort to humanely reduce the stray dog and cat population and keep Phuket free from rabies.

The clinic is set up at different locations, often on the grounds of Buddhist temples, schools, and government buildings, and sometimes under a tent. The program is not only for the sake of the dogs – it also benefits local communities by reducing dog bites and other problems caused by strays.

Soi Dog Foundation Co-founder and Vice President John Dalley said, “Our current three-year program in Phuket implemented in close cooperation with the local governments has had a large impact on the stray animal population. The situation on Phuket has already vastly improved from when we first started there 10 years ago.”

The second phase of the program will re-visit every area of Phuket again to catch those dogs who have not yet been spayed or neutered, the foundation said.

The second phrase is expected to be complete in 2015, after which only a low level of maintenance sterilizations will be needed and the population will continue to decline. Soi Dog will then shift its attention to widespread sterilization programs in Bangkok and other areas of Thailand to address larger dog problems.

In addition to spaying and neutering animals, the Soi Dog Foundation is investing a lot of effort to stop the dog meat trade both in Thailand and neighboring countries in the past year.

“Although fighting the illegal dog meat trade and caring for the thousands of dogs rescued from it had a huge impact on our operations last year, sterilization remains our prime focus. Large scale sterilization is the most successful method of controlling a dog or cat population, particularly in a country like Thailand, where mass euthanasia is contrary to local beliefs,” Dalley said.

In 2013, the Soi Dog Foundation sterilized a record number of 13,568 dogs and cats in Thailand including 8,876 dogs in Phuket alone.