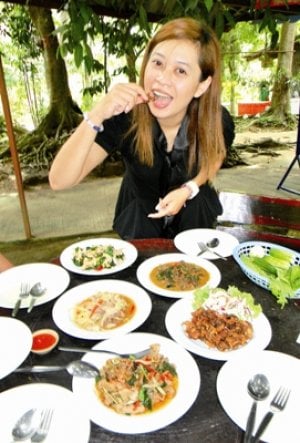 PHUKET: Crocodile, frog, snake and warthog aren’t the first things that spring to mind when a westerner thinks “bar snack”.

But in Thailand, these delicacies belong to the food group known as Gup Glam (snack food to be devoured with alcohol).

And where better to sample these outlandish delights than in the jungle on the outskirts of Kathu waterfall, where there’s an open-air Thai-style restaurant called Kruew Phai Lin.

You can’t get much closer to nature than this.

Large trees with roots the size of human legs form steps – and booby traps – alongside the path leading to the restaurant.

There are three outdoor seating options: right, left and center stage. There’s a smattering of heavy-set stone tables and chairs on three tiers of dusty earth, forming a semi-circular arena around the beating heart of this culinary-jungle amphitheater – the kitchen.

We opt for a table in the middle as an extended family of chickens cluck around our ankles approvingly.

As we eye the menu, the waitress tells us that all frogs used in the restaurant’s dishes are sourced locally – very locally – from the jungle around you.

Wisps of eye-stinging chili smoke tease the nostrils and make us splutter as sizzling and clanging goes on in the corrugated-tin-roof kitchen nearby.

We order another stiff drink as we mull over whether we’re going to eat what is in front of us.

We take the plunge and each dip into a dish, and as we snack and sip our way through them, our initial apprehension fades.

Even though there are springy little legs that look poised to leap from the plate of fried frog, and crocodile meat that has an almost serrated outer-skin, it all tastes deliciously familiar.

The wild boar was, surprisingly, a bit chewier and fattier than regular pork and had thicker skin.

The deer dish was the spiciest, and tasted a lot like beef. The crocodile had the most distinctive and unusual taste and texture of the dishes, but was our group’s most popular dish.

The frog was crunchy and had a few bones, but at the risk of sounding predictable, tasted a lot like fried chicken.

Despite their popularity as a bar snack in the Kingdom, frogs are seen by some virtuous Thais as passive animals and eating them is believed to bring about bad karma.

So if you’re superstitiously inclined perhaps opt for the crocodile out of the above dishes – it’s aggressive and tasty.

It’s the quality ingredients and menu variety that has kept the 60-or-so daily stream of customers coming for the past 17 years, she says.

She also says the natural surroundings and atmosphere of the restaurant is a draw for customers.

But we suspect the restaurant’s popularity may also have something to do with the humble Bheung’s skill and passion.

She’s cooking away furiously as she speaks, adding meat and vegetables into the steaming, sizzling wok, spinning it around and reaching for pinches of the huge variety of spices and herbs on the rack in front of her. Her movements in the kitchen are effortless, natural, at one with her surroundings – just like her restaurant.

And the reason she serves such bizarre dishes?

She just likes to give her customers something different to enjoy.

“I think a large part of peoples’ happiness and wellbeing comes from eating, and I enjoy giving people the opportunity to feel good about themselves by serving them great tasting food that makes them happy when they eat,” she adds.