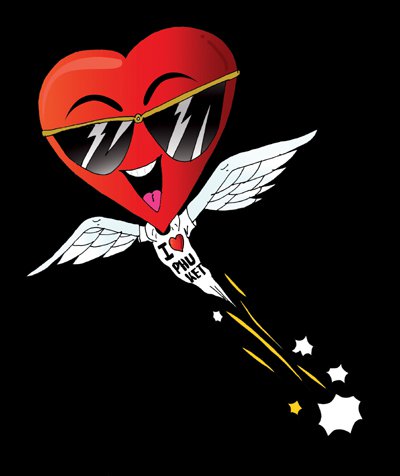 History is unclear on whether any of The Beatles had journeyed to Phuket before they wrote their 1964 smash hit with its charmingly quaint lyrics…”Money Can’t Buy Me Love.”

Clearly the lyricist Paul McCartney had never had the pleasure of a wander down Soi Bangla around midnight on almost any evening. Had he done so, he would have certainly witnessed plenty of filthy lucre being exchanged for love…or something that looks suspiciously like it, at all sorts of local entertainment venues. In fairness John Lennon did eventually come to his senses a few years later when he was quoted as saying, “Anyone who says that money can’t buy me love isn’t shopping in the right places.”

Possibly there’s some confusion between “love” and its close semantic and linguistic bedfellow “lust” going on here in Phuket. But after a few of the local beers…it’s a case of: “Will you stop nit picking? Look she just finds me irresistibly attractive. OK?”

Traditionally Valentine’s Day honors a series of “Valentines” who were in fact Christian martyrs. One Valentine in particular was secretly performing marriages at a time when the Roman Emperor Claudius II had enforced a law in which all young men were to remain single so that Claudius could improve the quality and size of his army. So, what
a romantic sort of guy he was…forget l’amour, let’s get on with the slaughter.

There’s little doubt that “The Pearl of the Andaman” holds abundant opportunities for Saint Valentine’s romance, whether on a short term, financial basis, or featuring the more stable traditional manifestation of the phenomenon.

While acolytes of the former may flock to Bangla and its fleshpots, the traditionalists can avail themselves of wondrous beachside dinners, bathed in Prosecco and moon glow, in which to plight their devotions, if they can afford the tab that is. Local resorts and upmarket eateries are always quick to jump aboard any marketing bandwagon whenever one happens to trundle along, and there are few better occasions for a male to lose his normal financial sanity than in pursuit of l’amour.

St Valentine’s is big business in Phuket, no matter how long the commitment is going to last.

Many a male has been so caught up in the romance of Phuket’s tropical island splendor, as to throw all caution to the monsoon winds and actually pop the question at a beach-side dinner on February 14. Beware, Phuket is one place where romance is certainly in the air, as well as the beer, and the Prosecco.

In all this, perhaps Dorothy Parker’s wise observation is a pertinent last thought. Acerbic as ever, she remarked that the difference between sex for love and sex for money is that sex for love costs you a hell of a lot more!

The Bronx zoo is encouraging New Yorkers to pay for the privilege of naming their hissing Madagascar cockroaches after a loved one this Valentine’s Day.

Nothing says “I love you” like giving your partner – or an ex – the honor of having a cockroach named after them. Ten dollars is the fee and for US$25 you can name a couple.

Buyers get a certificate and also a replica chocolate cockroach to sweeten the deal.

The Uzbekistan government has snubbed Valentine’s Day this year. All romance-themed celebrations are unofficially banned.

Concerts and other activities laced with love have been scrapped across the central Asian country.

Instead of the annual splurge on heart-shaped treats and gifting flowers, Uzbeks who “have to” celebrate Valentine’s Day are being encouraged to do so quietly and with minimal fuss and fun.

Readings of 16th century poems of their compatriots is one saucy show of affection being encouraged by authorities.

The country has a mottled history with Valentine’s Day. One Uzbek newspaper, Turkiston, last year described the holiday as having “evil goals bent on putting an end to national values”.

Uzbekistan is a predominantly Muslim country, but also has a large Christian following.

For US$75 per person, guests can scoff on gourmet nibbles, including Goat cheese stuffed strawberries and Salmon Wellington, while listening to the zoo curator talk about the intimate secrets of exotic animal mating.

But don’t think you still have time to join in. You don’t. It’s sold out.

One theory is that the tradition of sending love messages on February 14 began when a man named Valentine wrote love letters to his mistress from his prison cell while awaiting execution for adultery.

But the most popular explanation is that St Valentine’s Day is named after a Roman priest who was sentenced to death for secretly marrying Roman soldiers in defiance of a decree by Emperor Claudius II that soldiers must remain single.

The unpopular Claudius was having trouble recruiting soldiers for his armies because the men were loathe to leave their wives and lovers.

Claudius cancelled all marriages and engagements, but the priest, named Valentine, continued performing marriages in darkened rooms, whispering the words while listening carefully for approaching soldiers.

He was caught and sentenced to death, but as he awaited his fate, many of the couples he had married came to visit him and brought flowers and notes of support.

One of those visitors was the daughter of a prison guard, and she would sit and talk to him for hours to keep his spirits up. On the day he died, Valentine wrote her a farewell note and signed it “From your Valentine“.

The priest was beheaded on February 14, 269 AD, and in 496AD, Pope Gelasius proclaimed February 14 St Valentine’s Day in his honor.

The “police” lined the seven gangsters up against a wall and opened fire on them with machine guns.

No one was ever charged with the killings.

Phuket Lifestyle: Funk it up at the 2012 Mango House Festival

Phuket Books: Searching to do the right thing