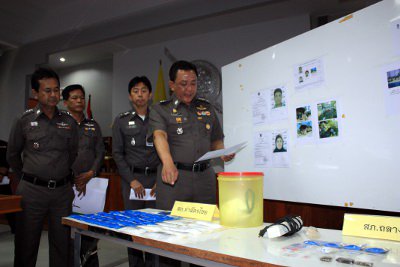 PHUKET: Phuket Police are searching for a man-and-wife team of alleged major drug dealers who are on the run after officers unearthed a trove of methamphetamines from the ground outside their home in Mai Khao.

Acting on a tip-off, Tah Chat Chai Police on Friday served a search warrant at the Mai Khao home of suspected drug dealers Yusobe Laiban and his wife Patcharee Klomsanoh.

The couple were not home, but police detained 41-year-old Kawee Maliwan when he tried to flee on foot from the dwelling. A search of his person uncovered 152 ya bah (methamphetamine) pills and two packages of ya ice (crystal methamphetamine) weighing 14.4 grams in total.

Also present at the house was Kawee’ wife Halia Waharak. Searching the premises, police found a package containing under one gram of ya ice hidden in a flashlight in the kitchen.

The couple were taken for further questioning, during which Mr Kawee revealed that Mr Yusobe and Mrs Patcharee had visited him at his home in Phang Nga the day before with a plastic bucket. They asked him to fill the bucket with ya bah and crystal meth and return by boat across the Chong Pak Pra Straits, in order to avoid the prying eyes of officers at the Tah Chat Chai road checkpoint.

Once ashore he was to bury the drug-laden container in a specified location near the couple’s house.

Searching the location, police recovered packages of ya ice with a total weight of 758.3 grams, 7,800 ya bah pills and a digital scale.

Mr Kawee and his wife were charged with possession of a Category 1 drug with intent to sell.

Police have requested arrest warrants for Yusobe and Patcharee and are already tracking them, Maj Gen Chonasit said.

In a separate case announced at the same conference, Maj Gen Chonasit described the arrest by Thalang Police on Friday of an alleged major drug dealer in Thepkrasattri subdistrict.

As with most major drug busts in Phuket, the capture followed a series of up-the-chain sting operations that started with the arrest of small-time users and dealers. Among those arrested and caught with small amounts of ya bah or ya ice were:

The series of successful sting operations led to a raid on the home of 30-year Teerasak Chettapan that uncovered 802 ya bah pills and 20.4 grams of ya ice. He was charged with possession with intent to sell.

Police will continue to investigate further to try and find his supplier, a woman identified only by her nickname “Eua”.

Maj Gen Chonasit said the arrests came during a nationwide crackdown on the illegal narcotics trade.

“I accept that there are more drug dealers out there in Phuket. We will continue to keep up the pressure on them,” he said.

Trousers to go on at Phuket Village Health Volunteers Fair