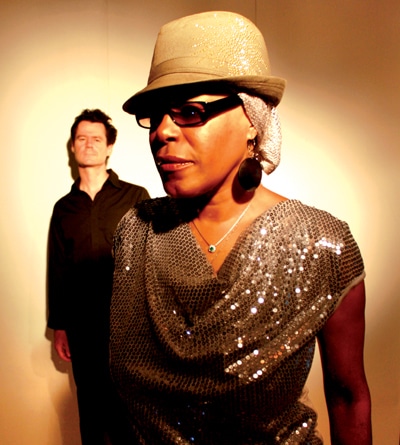 PHUKET: Dark Fiber is every telecom executive’s nightmare. “When the internet works, fiber optic cables light up but when it is down or is unused it is known as ‘dark fiber’ and that’s not good news.” says Gary Crause. He’s an ex- telecoms expert whose office, at the entrance of Boat Lagoon, is next to Telecom company 3BB where rolls of dark cable are stored. But that is not the the dark fiber of our story.

Gary is also known as Dr Fugly and he has a dark secret – he creates disco music in his spare time with Boy@Heart and BB Queen, known collectively as Dark Fiber and our story is about them and their lair which is called Legend Music.

Gary Crause, his wife Debbie and their son Blaze relocated to Phuket two years ago from Johannesburg, South Africa, bringing with them the Legend Music name which encompasses the studio, publishing company and record label.

The Dark Fiber project started just over a year ago when local songstress Bonnie Anderson came in to make a blues record.

At about that time Donna Summer (yes, the real Donna Summer) booked the studio for rehearsals, which prompted Gary to write some songs for her on the off chance she would ask for some.

“Bonnie’s blues recordings did not really gel nor did some jazz stuff we did but I really loved Bonnie’s voice so we called her in to sing a disco song called I Love To Dance on the demo that we would present to Donna Summer,” said Gary.

Although Donna Summer did not come into the studio in person her entire entourage arrived in an articulated lorry. They stripped down the studio and replaced it with their own equipment including lighting and two huge consoles. Twelve hours later they all left and went on to play at The Amanpuri with The Pointer Sisters.

“Meanwhile I had been working with an Estonian DJ called Triim laying down disco tracks. She wanted to record House Of The Rising Sun with Bonnie and when Triim left the island we found we had two disco songs on our hands,” said Gary

At about this time, songwriter and sound engineer Rob Cooke noticed the Legend Music sign and walked in through the door guitar in hand. Up until this point the band project was called BB Queen and Dr Fugly but obviously with the addition of Rob they needed a new name for both the band and for Rob who became Boy@Heart.

Dark Fiber was a name Gary had wanted to use for a long time as a song title. Rob and Gary both come from a telecoms background and were familiar with the negative telecoms’ dark fiber which but Bonnie also thought the name sounded cool and mysterious.

Together the trio recorded an album called Fibrate, on Legend’s own label, which they define as Indie Disco music. It is available on iTunes and ReverbNation where it currently holds the number one spot for Phuket.

Gary believes that most music is downloaded nowadays and has focused on this emerging global market. Even the album’s artwork is specifically designed for PCs and MP3 players, and in keeping with the digital trend some music is available in two formats; a long version and a radio edit (available for free download).

Through social media Dark Fiber now has a massive international presence and is, for example, very popular in Gary’s old stomping ground of South Africa.

However, they often need to put their own music project on hold while they deal with paying clients such as Pat Savage, who recently released Wind and Fire, touted as being “the best biker record ever made,”

Another success story is that of 13-year- old Phuket International Academy student, Teisha Jones, who came in to Legend to record some cover versions, but had some half-songs of her own she was working on. She left with five original songs on a demo and an AR contact in Australia, where she now lives with her family.

Gary is pleased with the amount of talented musicians on the island, many of whom can be called in at a moment’s notice, such as when he recently recorded the anthem Shine A Loving Light to aid Japanese tsunami victims.

The studio is not only about recording music, however. When Phuket-based filmmaker Shane Magnier needed a song for the soundtrack of his recent film Perfect Day, he turned to Gary. The film, featuring Irish actors Patrick Bergin (Patriot Games) and Pat Kinevane (King Arthur) also needed some of the dialogue overdubbed Legend was again chosen for that and other post production work.

Another famous actor Liev Shreiver (Wolverine, Salt) booked the studio while here on holiday, to do sports voice overs for HBO. “This was very interesting as we used a plug-in called Source-Connect that enabled us to record simultaneously here in Phuket and in New York where the director was,” says Gary.

But back to Dark Fiber and future projects. Gary tells us they are now working on a Dark Fiber Christmas single and a Dark Fiber version of Shine A Loving Light. They may they even leave their lair to bring Dark Fiber into the light by performing live and that is good news.

Phuket Gardening – Wattle it be, mate?