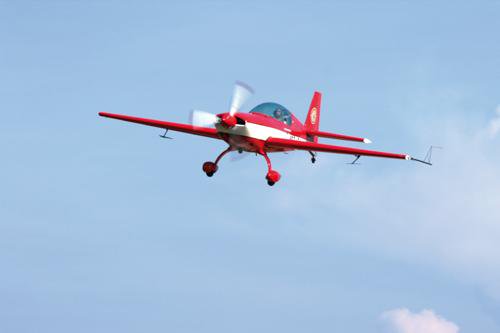 PHUKET: One of the undisputed highlights during the recent Phuket Airshow and Family Picnic charity event was a series of spectacular acrobatic performances by Les Vorosmarthy, the internationally famous stunt pilot originally from Budapest, Hungary.

The Phuket Gazette caught up with Les at the Phuket Airpark shortly before his fifth and final show on Sunday afternoon.

“I have been flying aerobatics since 1988, when I was 29 years old. It started as a hobby. I wanted to fly gliders when I was as young as 14, but my parents forbid me,” said the 54-year-old.

But there is nothing they can do about it now,” he added, with a laugh.

Married to a mainland Chinese woman from Beijing, Les has three children – 14, 17 and 19 – and all study Chinese at the family’s home in the Malaysian capital of Kuala Lampur.

“We didn’t want to live in China because for me in China there is nothing to do because I don’t speak or read the language. I would end up in an expat society somewhere. This way I can live with the locals in Malaysia. Everyone speaks English and it’s a very nice place.”

Les comes to Phuket two or three times a year and also has business interests in the US state of California, where he runs a Santa Barbara-based company that manufactures a device used to facilitate doctors conducting cataract surgery. But his real passion is flying.

“I flew two times yesterday, two more today and have one more to go,” he said.

Asked about motivation and mindset while flying stunts, he said there is an element of, quite literally, “winging it” involved.

“I put together a routine, which is based on several elements. Each maneuver is an element, basically. Each of these maneuvers I have flown hundreds of times. So depending on my speed and altitude I decide what I am going to do next.”

“This is a standard. This model is one of the very few planes in the world that can do unlimited, top-level aerobatics,” said Les. In one of his most remarkable stunts, the “tail-slide”, Les lets the engine idle and the craft go into a backwards freefall.

I go vertically up, and then when I reach a certain altitude that is safe for me to recover from, I pull back to idle. Then the plane just falls, backwards, until it reaches a certain speed when the air hits the tail in one direction and you flip over,” he said.

Asked how he developed these skills, he said: “I did a basic aerobatic training, which includes rolls, loops, spins – a few things. Then, in 1995, I started flying in aerobatic competitions. There are different categories, and as you move up through the categories more and more maneuvers are involved, and the complexity increases.

The categories are Basic, Sportsman, Intermediate, Advanced and then finally, Unlimited. This is organized in the US by the International Aerobatics Club, which has from five to ten contests yearly in my area. So I went all the way to the top level of competition, Unlimited.”

However, the pinnacle of his competitive career came in 1998, when he had a chance to represent Hungary in the World Championships held in Trencin, Slovakia.

Asked if aerobatics was as dangerous as it appeared, he said flatly: “It is dangerous. I have lost quite a few friends.”

One of the most dangerous parts of aerobatics is the unnatural stress it puts on the human body. Commonly known as “pulling Gs”, Unlimited acrobatic pilots sometimes expose themselves to a perceived weight of as much as eight times the normal gravitational (8G) force we all feel as weight at ground level.

Some other air shows have ended in tragedy when a stunt pilot pushed this envelope too far, passed out and crashed. Les is very familiar with the dangers of the so-called G forces, but is also very experienced in how to deal with them safely.

“You can get a blackout or, more commonly, what we call a greyout, which is when you don’t see anymore, but it is only temporary. When you pull Gs you get tunnel vision first. Then the colors go away. Then you see only the outlines of things. Then no picture. If there is no picture you have to immediately release; you need to stop pulling, otherwise you will lose consciousness,” he explained.

Fortunately, strong monsoonal conditions throughout the weekend of the Air Show had almost no impact on flying conditions, he said.

“I have been lucky. So far I have had no issues with the weather. The only thing I was concerned about yesterday was the presence of some low clouds, but they moved out. Today I actually clipped a cloud with my wing during my performance,” he said.

Les has no plans to stop his aerial performances.

“The main reason is that I enjoy doing it. The people like it and I get invitations from all over the place to fly in shows,” he said.

Asked what he thought of the nickname “The Mad Hungarian” that had been heard at the Airpark over the weekend, he said with a smile: “It’s madness only to the people who don’t know what it is really all about.”

After that, Airshow coordinator Pat James of the US Navy League stopped by to ask if conditions were safe enough for one last show, and with that Les was off once again
to his Extra for the final, thrilling performance of the show.