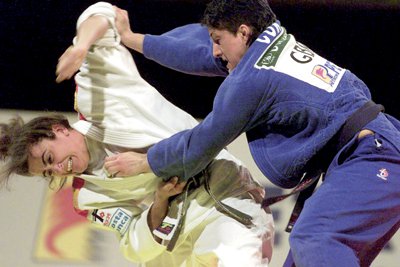 Sophie,30, broke the news of her Team GB selection as the under 52-kilogram competitor on Twitter recently, with her official team selection announced by the British Olympic Association on June 16.

She has made a comeback few would have thought possible and praises Phuket for helping her do it.

The two-time European silver medalist competed at the 2002 Commonwealth Games in Manchester and the 2004 Olympics in Athens. She took up the unforgiving one-on-one martial art when she was six years old and was the British judo champion at the age of 16.

“I was at the point where I didn’t connect with the sport. I felt like I hadn’t achieved my full potential, but I needed a new challenge,” she recalls, speaking to the Gazette via webcam from her training camp in Seoul, South Korea last week.

She moved to Phuket in 2005 with her partner looking for adventure and a “new challenge”.

“It was very tough. It was a massive learning curve but was very rewarding.”

Sophie then got a job at Chalerm-prakiat School in Phuket Town where she taught for a year-and-a-half.

“I was teaching English, but I was also appointed PE teacher. This was great. I was allowed to teach judo and bought mats for the kids.”

“Training Muay Thai definately helped me as an athlete,” she recalls.

“Without even meaning to, my hand speed – a vital skill in judo – increased by training in Muay Thai.”

“Today, as an older athlete, it is important that I feel good about myself mentally and physically. My work, training and life in Phuket made me more aware of how my body and mind work. This is unique to me – an edge I feel I have over my competitors.”

Sophie continued to teach judo and impart her skills to students at the British International School Phuket and at evening classes at a center in Phuket Town before she landed a job at Phuket International Academy in 2009.

“All of my jobs in Phuket took me out my comfort zone. Judo is natural to me. Even fighting on the big stage – it’s what I know. Teaching in Thailand took me out of that zone and threw new life challenges at me.”

On a sunny Phuket morning in April 2010, as Sophie pinned photos of herself at the Olympics to a board as part of an “Olympic Day” at her school, she felt a pang of nostalgia.

As she looked at the photographs of her former self competing at the highest level of her sport, she made a decision: “I’m going to compete again.”

A few weeks later she got her chance. A 12-hour bus journey to Bangkok and three fights later at the Thailand National Open and Sophie had a gold medal in-hand.

Sophie called her coach back in England, to see if he was interested in coaching her again.

Sophie made the decision to leave her school, her friends and her life in Phuket and arrived back in England in June 2010.

“I just wanted to train again. I thought I had an outside chance of making it to London 2012.”

Sophie moved in with her parents in Manchester, started training daily with her coach and living off her savings.

Her hard work paid off. Just one month later she competed as an independent competitor in Germany to win bronze.

“The British team was also there and at that point there were no strong competitors at the under-52kg weight level.”

“After winning bronze, people took notice. I was asked to compete again for Britain.”

“I didn’t get anywhere. I lost my second fight, but just to have the opportunity to compete on the world stage was a huge boost.”

And Sophie took advantage of her team re-call, winning six medals in 2011, including a bronze at the GB World Cup in Birmingham and at the Olympic test event in London.

“After that Team GB asked me to relocate to London in preparation for London 2012.”

“It all happened so fast. I rented a flat with another girl about five minutes’ drive from the training center and then I was back in the routine: eating, sleeping, training and all over again.”

Sophie said the past six months have been exhausting but exhilarating.

“There’s not much space for anything else. I’ve travelled around the world. I must have been on 50 flights, including a quick trip back to Phuket to see friends in November last year.”

Sophie currently trains seven days a week, with intense strength, conditioning and flexibility sessions. She also meets weekly with a nutritionist, psychologist and has regular video analysis seminars as part of her training.

Most days she’s up at 7.30am, out running and then eating porridge for breakfast, and maintaining a strict diet of vegetables, lean proteins and trying to keep her weight at under 52kg – no easy feat as her “natural weight” is 55kg.

“Every now and then I get an ice cream or a fry up, but not often.”

“I miss the fresh fruit of Phuket, and vendors who slice your fruit for you ready to eat. Here I have to cut fruit myself – I hate that,” Sophie jokes.

Despite the rigorous training, Sophie has one goal in mind – winning gold at London 2012.

“Anyone who steps on that mat in front me is another body I have to get out the way. I know on my day I can beat anyone in my weight in the world.”

Sophie said that a lot will depend on what happens at the games as to what she will do in the future.

“I’m in love with the sport again. In the future I would love to coach, especially children. I want to give something back. That’s my goal.