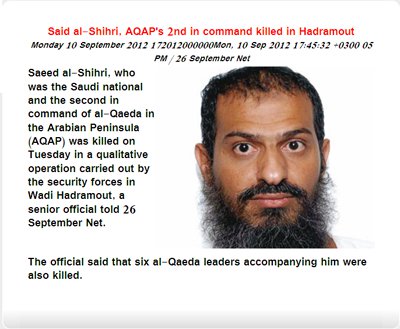 PHUKET: Saudi national Said al-Shihri, who was previously released from Guantanamo Bay and later became the deputy commander of al-Qaeda in the Arabian Peninsula, has been killed by Yemeni troops during a military operation in eastern Yemen, officials said yesterday.

The defense ministry’s news website, called 26 September, said al-Shihri was killed by Yemeni security forces during a “qualitative operation” in the remote eastern province of Hadhramaut. It was unclear when he was killed as the website’s Arabic-language report said the operation took place yesterday, while an English-language report claimed it took place on September 4.

Six al-Qaeda members who were with al-Shihri were also killed in the operation, the government’s website said in a brief dispatch. It gave no details about the type of operation, but some media reports indicated that a U.S. drone may have carried out the operation. Previous U.S. drone strikes have sometimes been reported as Yemeni military operations.

Al-Shihri was publicly identified in January 2009 as the deputy leader of al-Qaeda in the Arabian Peninsula (AQAP), which is based primarily in the tribal areas outside of the Yemeni capital city Sana’a, which remains outside the control of the Yemeni government. The group has orchestrated high-profile attacks since 2009, making it al-Qaeda’s most active branch.

Al-Shihri, who was sometimes also known as Abu-Sufyan al-Azidi, was a former officer in Saudi Arabia’s internal security force and spent about five years at the Guantanamo Bay detention facility in Cuba before being released into a Saudi rehabilitation program for militants. During his imprisonment at the controversial facility, Shihri had said he wanted freedom so he could work at his family’s furniture store in Saudi Arabia.