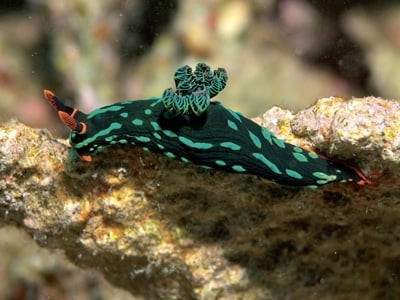 PHUKET: Perhaps it’s embarrassing, but I first got involved in diving because of the lure of the unknown treasures, which I “knew” were lying at my feet, just below the surface.
I wanted to discover statues, gold, porcelain, all those precious and valuable objects that were lost to humanity. However, a couple archaeological ethics classes and museum practicum courses managed to loot me of being so unconscionable when diving.

So now I find myself searching among the corals and sea walls for a different sort of elegant treasure – nudibranchs.

Discovering a blue dragon nudibranch or a blue ocean slug hidden among the corals is like finding a tiny gem (not all are so small), a living sapphire. All 3,000 species of these shell-less mollusks seem to have been created during a massive acid trip. Just look at their wild patterning, bright colors and ornate bodies and explain it another way. But no matter what brought them to their present form, such biological creativity has certainly made them jewels of the sea.

In addition to being tantalizingly beautiful, these creatures seem to have the perfect distribution in a reef; they are neither so common that divers begin to overlook them as “standard sights”, nor are they so rare that on the great majority of dives they can’t be uncovered.

It’s partly the searching, the discovery that draws divers to this clad (subspecies) of sea slug – it taps into many divers’ desire to be treasure hunters.

Though many of these carnivorous jelly-bodied creatures are accidentally overlooked during a dive, they are not an ignored spectacle by any means. Almost every Dive Master and Dive Instructor works nudibranchs into their dive briefing; it sounds something like this:

“Hopefully we’ll see at least one leopard shark [substitute manta ray, whale shark, turtle or large napoleon wrasse], but there are no guarantees. So, we’ll keep our eyes peeled, but let’s stay close to the bottom [or wall] and see if we can’t uncover a couple of interesting nudibranchs.”

The beauty about diving at the end of the season (which admittedly has already arrived and passed) is that by this time most dive professionals have their act down pat, which produces great dives and usually includes them swimming by several nice coral heads that have been identified as “nudibranch prone”.

However, being shown a nudibranch is not the same as discovering one. The experience is parallel to seeing a piece of blue and white Ming Dynasty porcelain in a museum, when compared to diving in the Gulf of Thailand and uncovering one yourself, perhaps I exaggerate.

The exotic nature of these creatures is intimately connected with their name, which is derived from the Latin word nudus (naked) and the Greek word brankhia (gills). Though their brightly colored bodies are a draw, it is their “naked gills” which take on a
variety of flamboyantly feathery and horned shapes that make them almost extraterrestrial.

With 3,000 known species already identified, and more being identified regularly in warm, shallow tropical waters (sound like familiar diving conditions to you?) it is impossible to stem the desire to search for them… because what if you were the next person to uncover a new species – right here in Phuket’s Andaman Sea?

If you have general questions about scuba diving or freediving in the Greater Phuket region, you can contact me at anytime at Isaac@Phuketgazette.net.

This story was originally published in the May 19-25, 2012 hardcopy issue of the Phuket Gazette.