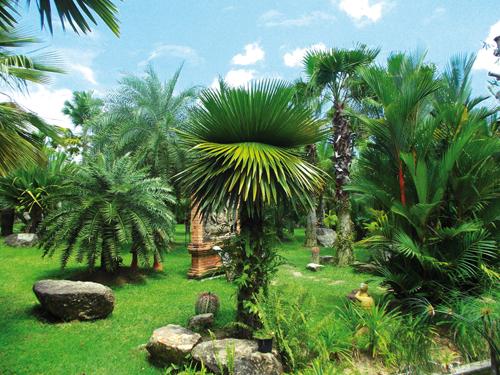 PHUKET: I have just paid my first visit to the Phuket Botanic Garden. It is a relatively new enterprise, and in the way of novel horticultural enterprises, I did not expect to discover an extensive, superabundant or mature garden. Wrong on all counts. When I emerged two hours later, I felt overwhelmed by the sheer scope and size of the project.

I understand that the botanic garden has been open to the public for less than two years, but although it is tucked away on a small road that joins both Chao Fa thoroughfares (click here for map), and although its brochure does scant justice to its diversity, it gets more impressive the deeper you venture into the verdure of its 15 rai (24,000 square meters).

Everywhere you look there is an element of surprise. You pass through imposing red portals and under a ylang ylang-clad trellis, and into a serene world initially dominated by beds of flowering plants – brilliant red zinnias for example – surmounted by impressive topiary – a Thai skill in evidence everywhere. There are waterfalls in abundance, cascading over high walls or gently arching from statuary, which artistically complements the evergreen foliage of ferns below, or palms above.

The dominant symbol of the garden is the circle: one strolls around the area along a perimeter road lined by manicured hedges, borders of neatly trimmed Siamese rough bushes (diospyros rhodocalyx) and long swathes of dramatic red coned costus spicatus.

Strategically placed off this encircling road are more than thirty named zones, all of which enunciate a different theme. Many of these areas are in turn circular and many have, as their centerpieces, imposing summer houses (sala) which in turn contain treasures. Some zones, wheels within wheels, are dotted with rounded flower beds with specimen trees at their center.

One of the first zones is the herb garden, framed by turmeric, ragwort, pandanus and lush stands of pepper – once one of the world’s most sought-after commodities. Within these leafy borders is a central display of scented woods, herbs and spices in bottles, all labeled with their botanical and Thai names.

Despite the garden’s youth, one encounters mature ornamental trees everywhere, both a wide range of palms and unusual broad-leaved specimens, so positioned as to provide oases of shade, and to artfully contribute to each carefully designed mini-landscape. And though plant labeling is haphazard, most of these specimen trees (here, for instance, star gooseberry, breadfruit, and calophyllum) do have large, imposing plaques which provide all the information you require. A thoughtful point, since trees are usually more difficult to identify than flowering plants.

It is impossible to cover the waterfront in one article – but to pursue the metaphor – one of the most spacious and impressive zones is the rain-forest area, entered through a gloomy tunnel where lianas caress one’s face, and which has, as its dramatic backdrop, a waterfall some fifteen meters high. You fondly envisage how Phuket might have looked in the unspoiled past, and stroll round on raised wooden decking while the water cascades into a rock-bounded, koi carp-filled pool, and thence over plant-clad stones. Bird’s nest, maidenhair and staghorn ferns, platyceriums, heliconias, clusters of bromeliads such as aechmeas and neoregelias. It is an architectural and horticultural masterpiece.

In fact there are epiphytic plants everywhere, and nowhere are they more abundant than in the orchid garden – as brilliant and colorful as the rain-forest is gloomy and tenebrous. Here the circular beds are dominated by bromeliads (tillsandia) with vivid red or yellow bracts. And orchids of every conceivable variety in pots: huge pale white phalaenopsis whose flowers seem to float on air, rows of delicate dendrobium orchids are arranged on unseen rails, and bicolored cattleya cultivars with perhaps the most spectacular flowers of all. Worth another visit? I certainly think so… watch this space.

This article appears in the current (June 8-14, 2013) issue of the hard-copy Phuket Gazette newspaper, now on sale at newsstands throughout the island. Digital subscribers may download the full newspaper, this week and every week, by clicking here.