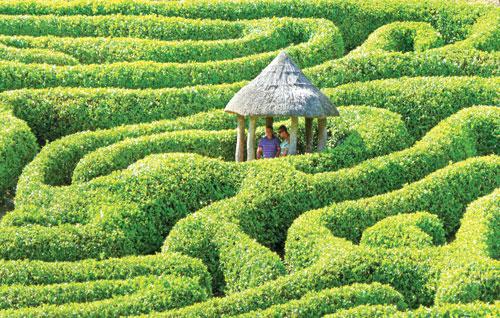 PHUKET: Some weeks ago, I received a most unusual, perhaps I should say labyrinthine email – a request from Phuket resident Alex Riva who explained:

“I am planning to plant a hedge maze and was wondering what is the most cost effective and recommended type of hedge.”

Somewhat bemused, I wrote back requesting more specific details. The reply included the information that it would be a large maze in an area 30 by 30 meters, with a planned 700 meters of hedge at a height of about 180cm, and that he hoped to complete the finished article in “one month”.

As the ads constantly remind us, Thailand is “amazing”, but a maze in one month? Pardon the pun! I respectfully suggested it would, even granted the phenomenal rate at which shrubs and trees grow in the tropics, take longer to create.

My research made me realize there was still plenty I did not know about hedge mazes, but by the time we met up, things were, well, a bit more straightforward. In fact, we agreed about what was probably the front runner, a bushy shrub in the ehrinia genus. Of two likely candidates, one has sandpaper-like matt leaves and grows everywhere on the island.

But that is precisely the problem. It grows everywhere because it is self-sown, probably courtesy of a passing bird, and people only prune it when it threatens to get out of hand. Hence the presence of one outside my garden wall. “Chaa” as it is known colloquially, would have been ideal for a maze, vigorous and amenable to clipping. But six nurserymen shook their heads when I asked if they could supply quantities of it. And apparently it will not take from cuttings – though I am presently testing the truth of that assertion.

What next? Another shrubby plant in the same genus. Known in Thailand as “sai”, it is, thank heavens, readily available in garden centers and will ultimately probably fit the bill. It differs from “chaa” in having smooth glossy leaves, and though less hardy, is strong enough to withstand the clipping it will inevitably get. Often pruned into a conical shape, Alex’s maze trees will need to be allowed to grow sideways in order to create an impenetrable wall. That’s the idea, isn’t it? But you would still need two or maybe three sturdy plants every single meter.

The next best choice would be a large shrub (syzygium) which belongs to the myrtle genus and is known, in Thai, as kristina. It is a ubiquitous presence here as a decorative hedge, but has more delicate foliage than ehretia. When young, the leaves are an attractive pink/ bronze color, but turn with age to light green. Like its rivals, it will tolerate a range of soil conditions, and enjoys full sun. My only concern is that it is not a dense bush, and though pruning will thicken up the plant, it may need to be wider than the projected 40cm to provide an effective screen.

There are other candidates. Japanese box, sometimes known here as “bonsai” for obvious reasons, possesses small, intensely glossy leaves. The best looking of all hedge plants, the neatest and the densest, it is, unfortunately too slow growing for Alex’s requirements.

I did run the rule over two other possibilities. One, duranta repens, grows quickly and thrives in diverse conditions. Its yellowish foliage is distinctive. However, it may not reach the required height in less than two or three years, and may leave gaps close to the ground.

The bougainvillea is my back-up choice. If all else fails, you can rely on this hardiest of woody shrubs to do the business. It is very thorny, but in a maze that is surely no disadvantage. And it is as tough as old boots. Once established, nothing will deter it. Available everywhere, it may provide a solution – if all else fails.

Meanwhile Alex is experimenting with these shrubs and will shortly decide which is going to be chosen. Once established, the maze will be open to would-be puzzle freaks on the bypass road next to – believe it or not – an upside-down house.

Tip of the week – Striking cuttings

I recently suggested that the present soft, moist earth offered a good opportunity for striking cuttings. There are different kinds of cuttings and, of course, different success rates for different plants. Any plant that sprouts from its roots will grow from root cuttings.

However, the most common technique is to use stem cuttings – handy if you have recently done some pruning. These are divided into hardwood and softwood.

Hardwood cuttings are mostly used to propagate shrubs and trees, including fruit species such as figs and mulberries.

Pencil-thick cuttings should be taken from the previous season’s growth – which is often lighter in color than the older wood. Slice off the top inch or two of each stem, and cut the stems into 6-9 inch lengths.

If you have some, dip the moist bottom end in rooting (hormone solution) powder and plant them out. Personally, I prefer to use pots to start my cuttings: in that way, you are better able to control levels of moisture and sunlight in the crucial early stages of the plant’s growth.