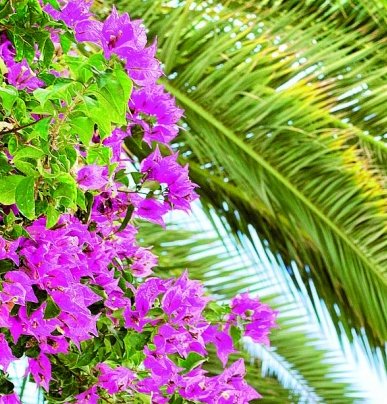 PHUKET: WHEN enthusiastic gardeners who have lived in Europe or North America first come to Phuket, they need to understand the very different requirements that plants have in this habitat.

Because it is much hotter and, during the monsoon, much wetter, few temperate plants can survive these conditions. They may be able to endure several degrees of frost but, on the other hand, may be unable to handle direct tropical sun or the saturated ground that is the norm at this time of year.

Tropical plants however, and especially those native to zones 9, 10 or 11 on the horticultural scale, will not only survive here, but will grow at a rate of knots not seen in temperate climates.

Lantana camara, for example, having escaped from South America, has become a weed in many tropical countries. The Indian rubber vine has colonized large tracts of land in Queensland and the water lettuce has clogged up waterways in Florida’s Everglades.

Take the bougainvillea (fuang faa). Although it is cherished, and is a feature of gardens in many Mediterranean coastal regions, it is not that easy to grow in, say, southern Spain or France.

Many attempts were made in my Andalucian garden before two fuang faa became really established. Here in Phuket, the experience has been quite different.

Not only are Thai bougainvilleas available in a glorious range of colors – often grafted onto the same shrub – but they grow with a vigor that is extraordinary.

I just had to cut down a specimen that had grown nine meters high in a little over three years. It possessed a trunk the thickness of a man’s thigh and an armory of long spines that rendered the whole process of removal quite painful.

But it was painful in another way too, since the shrub had been a beauty to behold, in constant flower with both white and pink bracts. A real feature of the garden. But it had to go; it was impeding the growth of other plants, was threatening to fracture the garden wall, and was beginning to spread across the narrow soi.

The point is this: Plants here not only grow far more rapidly than in Europe, they also grow much bigger. A massive generalization, but one that is more-or-less true. And since most tropical plants are unfamiliar to the newly arrived farang, he does not know what to expect when he pops them into his pristine flower beds.

What he might recall as a small pot plant struggling to survive in an English drawing room, can assume the proportions of a tree in this fecund climate. Take the so-called “rubber plant'” or ficus elastica. A member of the fig family and originally cultivated as the primary source of rubber, it was superseded by hevea Brasiliensis in tropical plantations everywhere. Just look around Phuket to see the evidence.

Subsequently, and no longer a commercial proposition, ficus elastica became a popular indoor pot plant. And this new popularity has spawned a number of attractive new varieties: now there are a number of ornamental cultivars with purple leaves (burgundy), or with variegated or gray-green foliage. Despite the fact they’re all houseplants, they may grow to 30 meters or more outdoors here!

To a less spectacular extent, the same is true of variegated crotons or the many varieties of cordyline, including the dracaenas.

Again, many of these have been grown as house plants in northern drawing rooms since the early 20th century, but here Dracaena fragrans is a common yard plant that may reach six meters in height.

And, what’s more, it thrives on neglect, unlike most of us.

Tip of the week – cool coriander

THE final herb tip is about coriander. Easy-to-grow, and frequently used herbs and spices have been chosen for this feature, and coriander is definitely in this category. It is one of the world’s most widely used seasonings. Both the fresh leaves (the herb) and the seeds (the spice) are used in Asian cuisine.

In Thailand, where the leaves are called Chinese parsley, the roots are also brought into service in cooking. Coriander is easy to grow in your kitchen garden. It can also be cultivated in pots if space is limited.

You can try using a few of the seeds bought as a culinary spice: if they do not germinate, packets of seeds are available. Best results come from plants grown in fertile soil which is not allowed to dry out completely.

If you have a garden that you would like to be featured on this page, please email Patrick by clicking here.