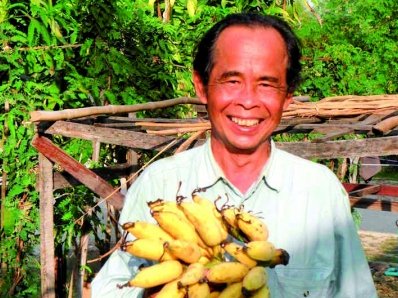 PHUKET: Bananas come in many shapes and sizes and grow readily in Phuket.

Some readers may remember an old pop song that opens with the phrase “Yes! We have no bananas.” This is, however, not true of Thailand. The Kingdom has many kinds of banana (botanical name musa).

Nobody knows for sure, but Southeast Asia may have been where the first wild bananas grew on the margins of the rain forest, and where cultivated varieties were later developed.

What people sometimes fail to appreciate, however, is that only a few cultivars produce the sweet, seedless bananas we have come to know and enjoy in cooler climates.

One of these, the acuminata or Cavendish banana, which is the most commercially known, is being wiped out by a deadly disease in several Asian countries.

The banana is a very unusual plant in many ways. Actually it is the world’s largest herbaceous flowering plant. It looks like a tree, but isn’t. In fact its trunk is not a conventional tree trunk at all, but a soft pseudo-stem.

Slice through it, as many people do on Loy Kratong Day, and you will find that it consists of layers of watery leaf sheaths.

Its uniquely-shaped fruits hang in huge, heavy clusters or tiers, between three and 20 in number, but the individual bananas do not grow downwards, but upwards.

Picked green for export, or early by local cooks, they have a wide range of culinary uses. Even the exotic-looking flowers that appear on a terminal spike, are considered a palate-cleansing delicacy. Steamed or raw, these are commonly served with pad thai.

The leaves, used to wrap foods such as sticky rice and to serve as a natural foil when barbequing fish, impart a distinctive aroma to the dish. They are also the source of a very durable fiber.

In the horticultural scheme of things, the banana grows so rapidly and in such a range of soils that it is extremely useful, both for gardeners and landscape designers.

Reaching a maximum height of six meters, the plant will swiftly fill up bare open spaces, or cover unsightly objects. But remember, while its huge paddle-like leaves are beautiful, they are easily shredded by high winds and can be unattractive when old and yellow. These old leaves are best cut away.

Since it grows vigorously, your banana will need to be closely watched. It will tend to spread in a lateral direction, sending up any number of new shoots.

This is especially true if it is planted in rich, moist soil and protected from wind.

For the small garden, decorative cultivars are your best bet. Grown for their ornamental value, they are generally much smaller and more manageable. They may be cultivated either for their handsome foliage or their attractive flowers.

For example, Sumatrana has leaves that are maroon underneath and green above. More popular is M. uranoscopus which has its characteristic, tightly-sheathed, red flower at the end of an upright spike.

M. ornata has flowers that range in color from lavender to deep purple. And on M. velutina, the bracts are pinkish and are succeeded by pink, velvety fruits – most unusual.

Bananas are relatively easy to propagate by dividing up the fleshy roots. In fact, the root systems are not as large as one might expect, which is another bonus.

If you need some ordinary banana plants, you can find them just about anywhere in Phuket. They are considered lucky in Thailand, and a neighbor will probably be prepared to give you a few roots.

If you want to obtain the ornamental varieties, you will need to visit a good plant nursery. These cultivars are becoming increasingly popular in Thailand, and rightly so.

So yes, we do have bananas, and oodles of them.

If you have a garden that you would like to be featured on this page, please email Patrick by clicking here.

Phuket Gardening: Delving into the Dragon