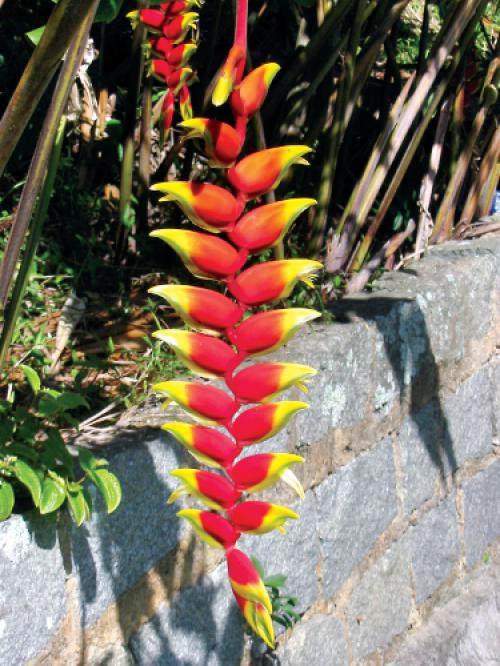 PHUKET: I have deliberately kept the heliconia for another day. Why? Because, despite the name, the connection with the sun is less obvious than with the sunflower brigade. I can only assume it is because one common variety has chrome yellow spikes, much used as a cut flower by florists. But whatever the reason, the heliconia is a favorite here in Phuket; a tall reed-like plant with large oval pointed leaves that thrives best in marshy terrain.

In fact the species has, like the canna lily, become naturalized around klongs in parts of the island. Colloquially known as the “lobster claw” or “false bird of paradise”, its numerous exotic cultivars bear showy waxy flowers that consist of brightly colored and oddly shaped bracts. Many retain water and become home to insect larvae.

These clusters of bracts may be erect or pendulous and while they are predominantly red and yellow, they do come in other hues. There is such a range of new strains, owing to the intense activity of hybridists, that the plant now has its own club (Heliconia Society International). These new forms vary enormously in size and shape with “stricta” strains producing rigid upright bracts, such as “golden torch” – much in demand as a landscape plant in public locations – and dramatic, hanging rostrata varieties.

But do remember that if you want heliconias to thrive in your garden, they will need rich soil, heavy feeding and plenty of water. And remember that each stem flowers but once, so cut back old growth: this practice will encourage new underground activity and healthy rhizomes. Typically heliconias come into their own in the wet season. So, while they abhor droughts and cold weather, perversely, and despite their name, they do not need an excess of tropical sun.

How time flies, it is now three years since I composed a list of the “Top Twenty” flowering plants. The hibiscus came in, perhaps rather arbitrarily, at number ten. Most enthusiasts would rate it more highly: certainly on looks alone. H. sinensis, the best known species, is not easily upstaged. Its familiar, showy, trumpet-shaped flowers come in almost every color under the sun. Visit your local garden center and you will find small plants already displaying spectacular blooms in luminous shades of red, yellow, magenta, orange and white. Many consider the hibiscus to be the tropical flower par excellence, noting that its red blooms are traditionally worn in the hair by eligible Tahitian maidens.

H. sinensis is frequently employed in Phuket as a hedge, since it is a woody shrub, robust enough to form a tall barrier. And its propensity to flower most of the year round gives it an advantage over most of its rivals. If it has a disadvantage as a candidate for hedging, it is because the ovate or toothed leaves are somewhat sparse and a hibiscus screen is not always very dense. One variegated variety which has leaves in shades of pink, white and green, is often preferred for this purpose. It has a more compact habit, prunes readily and has smaller but vibrant red flowers. The unusual hybrid “Snowqueen” has cream foliage when young: it turns either crimson or pale green when mature.

But there are downsides. The flowers are ephemeral – they last only a day – and the plant itself will need plenty of TLC during the initial stages of growth. If you experiment with the hybrids available in nurseries, you may well find them difficult to establish here. The strains have often been developed in Florida or Hawaii (with names such as “Blue Bayou” or “Hula Girl”) and are not quite right for this climate. Maybe they would do better as carefully tended container specimens. Disease, moreover, can be a problem. Ailing plants are very susceptible to attacks by mold and fungus, so ensure all your hibiscus have plenty of water and nutrients.

Next week, we will have a look at other and startlingly different species of hibiscus – H. schizopetalus, H. mutabilis and H. sabdariffa. Unsurprising when you consider that there are more than 200 species in this fecund family.

Gardening tip of the week

Later than usual, the dry season is finally upon us. As a consequence, the ground is rapidly drying out and becoming hard and unworkable. So daily watering is needed, especially for newly transplanted specimens, for most grassy areas, and for container plants. Soak pots and other containers thoroughly, then allow the soil to become almost dry before another watery application. Porous pots will need more water than glazed, plastic or concrete ones because of higher levels of evaporation.

Continuous direct sunlight suits certain shrubs: euphorbias, neriums, bougainvilleas, ixoras and adeniums. These will only require water in droughts and will bloom more abundantly in dry conditions. Pereskias, jasmines and gardenias also thrive in full sunlight, but need moist soil. At the other end of the spectrum are plants that will need frequent watering and some protection, even in open ground. These include all the ginger family, canna lilies, heliconias and the currently fashionable lilac-hued ruellia.

Phuket AA: Party till you drop