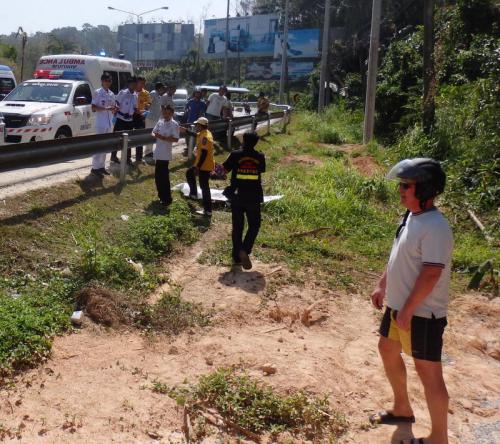 PHUKET: A Swedish man on his way to the beach yesterday morning was killed when his motorbike went off the road in Thalang.

A friend who was following on another bike told police that the pair were headed to Nai Yang Beach.

“He overtook my motorbike on the curve and lost control,” the friend said. “The bike fell over and he bounced on the road and struck the metal guard rail. He died instantly.”

The friend gave the victim’s name as Mikael Nilsson, 51.

Police were called to the scene, on Road 4026 – the main bypass road to the airport – at 11am. They found no helmet and said the only wound on Mr Nilsson’s body was a bruise on his neck.

“We believe he died as a result of striking his head against the guard rail, but the cause of death will be determined by Thalang Hospital,” said Lt Thanom Thongpan of Tah Chat Chai Police.

The Swedish Embassy in Bangkok has been notified of the incident, he added.