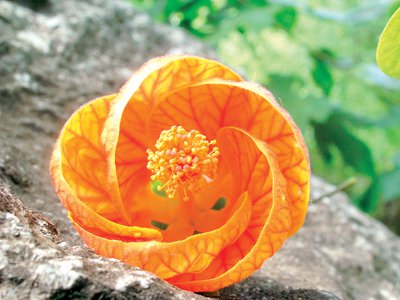 PHUKET: Chinese Lantern is the common name for some varieties of abutilon. A member of the mallow family, this large shrub or small tree (here the distinction really is blurred), can reach ten feet in good conditions. Mostly South American in origin, the abutilon species are true tropicals, and do well in Phuket’s climate.

Abutilon species will tolerate light shade or full sun, and are suitable candidates for a large container. Most have slender, tough twigs and jagged-edged, lobed leaves, somewhat like the hibiscus, to which it is related. Some five-petalled, trumpet-shaped flowers are hibiscus-like, but most of the cultivars seen in gardens have pendent, bell-shaped flowers, which remind one of the orange Chinese lanterns seen at festival time.

Originally from Brazil, these lantern hybrids come in a range of colors, from white to a deep, bronzy red. Here is a run down of some of the more widely known varieties of abutilon: Canary Bird has yellow flowers; Cannington Carol is a dwarf variety with dense foliage and variegated orange bloom; Boule de Neige, an old variety of cultivar, has white flowers flushed with pink; Ashford Red, perhaps the most widely seen, has large leaves and brilliant deep scarlet blooms; the Indian mallow has velvety, heart-shaped leaves, which may be eight inches across. Suntense, a hybrid from another branch of the family, has intense violet-colored flowers that open up in hibiscus fashion. Since this one comes from Chile, the climate in Thailand may be a bit on the hot side for it. But there are still plenty of others to chose from.

The beauty of the abutilon resides not just in its distinctive pendent flowers and foliage, but in the fact that it will bloom all year round in the right conditions – a sunny position, and a well drained soil. It requires little water, though it should not be allowed to get bone dry. Pruning will reduce flowering, but will result in a more compact plant, especially when potted. The abutilon can be grown easily enough from hard-wood cuttings, unlike the tongue-twisting xanthorrhoea or tree grass.

David Strachan, from Surin, wrote in recently saying that his tree grass had a spot of bother. On his balcony specimen he noticed “small white spots… under the leaves and clustered around the center of the stem”. He added that he had already asked a nursery for advice and that they had provided a milky spray, which failed to improve things.
I suggested the problem might be powdery mildew, a real issue at present because of the excessive rainfall, especially for sun-loving plants that do not enjoy too much humidity. In its native habitat in Australia, xanthorrhoea inhabits rocky, stony habitats where the surface water drains away quickly. Here, and especially in a pot, xanthorrhoea can easily be over-watered. This will weaken its immune system, and render it more likely to succumb to a fungal or bacterial disease. Worse, to root rot.

After my tentative diagnosis, David, currently away, wrote back to confirm he suspected that his “maid had been watering it too enthusiastically”.

But the mystery thickens. David also sent a recent photograph, white spots and all. Of course, photographic evidence can’t always be relied upon, but the plant pictured has spinous, fleshy leaves, and looks for all the world like a succulent, such as an aloe vera. Moreover, the crown of the plant is already looking brown and dead. Right diagnosis, wrong plant? Maybe. Certainly, what is bad for tree grass is worse for cacti.

Almost all succulents are desert plants, and need only an occasional drenching, which they would get in the wild. But every (rain) cloud has a silver lining. If David’s specimen is a succulent, it can be readily replaced. Moreover, the remaining fleshy leaf-stems can be cut off and potted in sandy soil where they may take root.

THE last few months have seen more rain than at any comparable period in the last fifty years. Phuket, by virtue of its topography has largely escaped flooding, but the impact on vegetation is marked. Everywhere the soil is saturated. Trees are growing more and more leaves, and garden plants are lush and green, especially those kept primarily for their foliage; however, many shrubs are not blooming as freely as usual – for example oleanders and bougainvilleas, as well as such potted plants as euphorbias (crown of thorns), adeniums (desert rose) and pereskias (wax rose).

Remember to reduce watering to a minimum for these plants, especially with potted specimens. If the mix in your containers is already moist, leave them well alone and empty excess water from the saucer under the pot. Remember that container plants are more likely to die from sodden soil, which encourages root rot, than from under-watering.