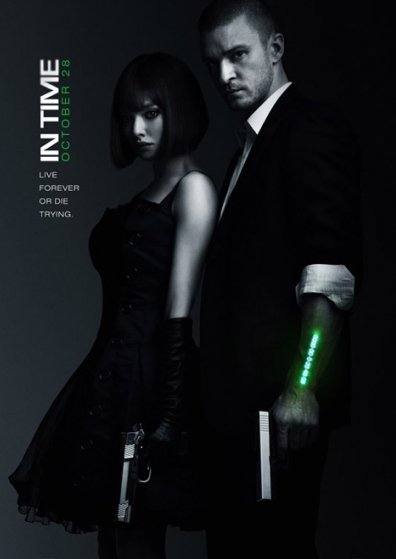 PHUKET: A sci-fi flick about immortality starring Justin Timberlake is out now. It’s not great; it’s not terrible – if you have time to spare, then give it a go.

Tick, tick, tick – six years have passed since Andrew Niccol, writer of the Truman Show and director of Gattica, did a project of note so it’s about time he got back in the director’s chair.

His new sci-fi movie In Time is in cinemas now and stars Justin Timberlake, Amanda Seyfried (the one that looks like Dakota Fanning) and Cillian Murphy.

The plot has a great premise, but is poorly executed. Should you read on? Only if you can spare the time, and like puns.

“I don’t have much time. Who has time for that? You got a minute?”

Like any joke, once is funny. By the end of the film you’ll stay in your seat waiting for the credits, just so you can remember the name of the screenwriters, find their Facebook page and send them hate mail. Needless to say the puns wear thin, as will your patience.

The premise: In the near future humans don’t age past 25. Life is paid out a minute at a time. The rich can live forever and poor die young because they’re short on time and money, but – wait – time is money. Confused? We were too, and you never find out why humans magically stopped aging, or how, kind of important.

In this future world (no idea what year) rich people can live forever while the poor live day to day, working a few hours to live a few more days. People in the ghetto walk, fast, talk fast, because the clock is ticking, while the rich live in separate – wait for it – “Time Zones” and mill around like they have all the time in the world (this pun also used in movie).

Will Salas (Timberlake) is one of the poor sods living on borrowed time. Literally, people borrow time; steal it by rubbing their glowing time-codes on their arms together.

Salas works in a factory, lives with his stunningly good looking mama (Olivia Wilde) and doesn’t have much time for – well – anything really. He earns a few weeks here, gives a few away to a little homeless girl because he’s such a great guy. Yawn. Where is this going?

Salas meets a guy, Henry Hamilton (Matt Bomer), in a bar who has more than a century on his arm. Short story: Hamilton transfers his time to Salas while the latter is snoozing, with a message saying “Don’t waste my time” (yawn, yawn). Hamilton commits suicide, and the action-getaway-fugitive portion of the movie gets into full swing.

A group of Timekeepers, headed by Raymond Leon (Murphy), set after Salas who by now is crossing time zones like there’s no tomorrow.

Salas reaches the rich zone of New Grenwitch of wherever the hell he is (real location: Los Angeles).

After a lot of drawn out scenes with Salas relishing his new riches, he meets Sylvia Weis (Seyfried – really does look just like Dakota Fanning). She’s the stuck-up, rich daughter of billionaire overlord of all things time, Philippe Weiss (Vincent Kartheiser).

Fast-forward a few uneventful scenes at a party, a little midnight skinny dipping, and Salas and Weiss Jnr are on the lam, in love, and hellbent on taking down the “system” (her daddy’s system).

From here on in it’s all car chases, hostage demands and high jinks for the pair who are hunted by the ever-diligent timekeeper Leon and his band of not-so-merry men.

Salas and Weiss start breaking into time banks and giving to the poor. Wow, what a stellar pair they are. And Weiss Jnr spends a good portion of her new vigilante, high-octane action life donning high heels. You go girl.

We wouldn’t dream of telling you the end of this movie because we can’t; it makes no sense.

Are there any good points? Yes. The cinematography by Roger Deakins is gritty, edgy, and looks-wise In Time is quite beautiful.

Even in the ghetto where the streets are all but deserted, we feel that we have entered a foreign landscape in the future.

Other thumbs-up include Niccol’s simplistic approach to aesthetics in the film, including clever costumes and the cars – oh, the cars – which the timekeepers cruise around in, are beyond cool. They look like Knightrider’s car KITT gave birth to Mustang.

But toys and good looks alone aren’t enough for sci-fi fans. They need substance and a well-executed plot, and for this, In Time stops short.

The cast is as irritating as the plot. Timberlake is almost there, but the absurdity of his lines and too many puns make his character kind of absurd too. You just don’t believe any of it. Before you know it, you’re asking yourself questions like, “Didn’t he used to have a perm? When did N-Sync break up? Isn’t he married to what’s her face?”

Timberlake has had a smattering of hmm-kay supporting roles in The Social Network, Bad Teacher and a danced-around mediocrity in Friends with Benefits, but this first outing as a lead is one that is not memorable for the right reasons.

The real shame is that Irish actor Cillian Murphy (Batman Begins, Inception, 28 Days Later) was cast in such a dire movie. His performance is impeccable as ever.

And Seyfried does a shoulder-shrugging okay job, but – wow – she really does look just like Dakota Fanning. The resemblance is uncanny. Are they sisters? I’m Googling it… nope, not sisters. This is a recurring theme in the movie – it makes the mind wander because it’s just too much work to follow.

If you are looking for a great way to just space out for a few hours and not really focus on anything, then go and see In Time, but only if you have time to waste.

Parents: There is violence aplenty in the film, though mostly bloodless and not gratuitous.

Sex is implied rather than shown. One skinny-dipping scene where you might see a bare bum, but we still can’t be sure.

Swearing is kept to a minimum with only one ‘F’ word and a few other four letter words, but not like a Tarrantino flick.