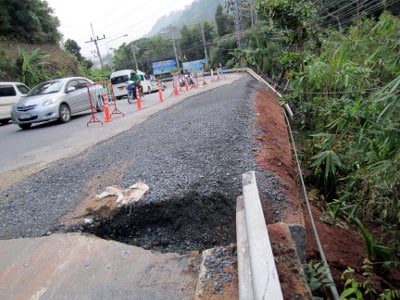 PHUKET: Phuket Provincial Highways Office (PPHO) chief Arun Sanae has applied for a budget of eight million baht to fix the damaged Patong Hill road, but says he does not know when the funds to begin repairs will arrive.

The road suffered a severe rip in its surface last month after heavy rains caused a landslide underneath it on October 13. The road then suffered further damage after yet another landslide at the same location on October 19.

“Because Phuket was included on the list of ‘flood disaster areas’ by officials in Bangkok, Phuket Governor Tri Augkaradacha has already forwarded the budget request as a top-priority project under the ‘disaster funding’ system,” said Mr Arun.

“That way, instead of having to wait for normal budget channels, we should get the budget the same time as Bangkok gets the budget to fix its roads,” he said.

The news follows Patong Deputy Mayor Chairat Sukbal appealing directly to Governor Tri to have the dangerous road fixed as soon as possible in order to ensure the safety of passing motorists and to limit the negative impact on tourism from such a busy road being left unrepaired.

Mr Arun said the 8mn baht applied for was only a “tentative” estimate of what was required to fix the road.

“A full repair plan has yet to be drawn up as engineers have yet to fully assess what would be required to fix the road permanently,” he said.

“If the road remains like it is now, there will be many accidents. The road will probably collapse again, and this time it will be much worse,” he told the Phuket Gazette.

“The budget isn’t too much for them to approve. They can either pay 8mn baht [to fix the road] or lose more than a billion baht in tourism-generated income, because that is the potential impact of exposing tourists to such an unsafe road,” the mayor said.