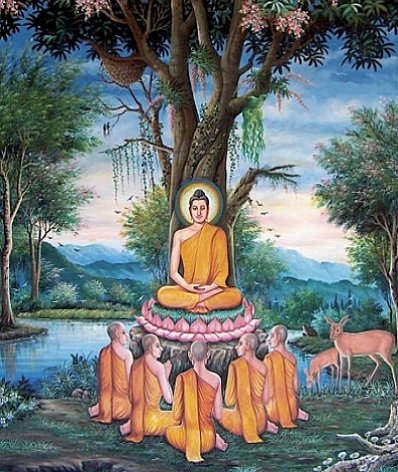 For non-Buddhists, the long “dry” weekend to welcome the “wet” season is a good opportunity to relax, if nothing else.

For most devout Buddhists, however, there is much deeper meaning and purpose to the holy weekend.

Here is an explanation of the holiday, its roots and customs.

Asaha Bucha Day
Marked by the full moon of the Thai lunar calendar’s eighth month, Asaha Bucha was designated to celebrate and perpetuate the first sermon that the two-month-enlightened Buddha gave to his first five followers over 2,500 years ago.

It is for this reason that in Thai, Asaha Bucha is also referred to as wun pen deuan bpad – the full-moon-day of the eighth month.

It is one of three lunar-based Buddhist holidays in Thailand.

Celebrations and ceremonies in Buddhist temples are generally the same for all three days.

After the offerings, blessings and sermons during the day, there is a climactic moonlight candle procession during which participants, carrying a lit candle, three joss sticks and a lotus flower, encircle the temple’s main Buddha hall three times.

The number three in Buddhism refers to the “triple gem” and symbolically represents the Buddha, his teachings (Dharma) and the clergy (Sangha). This is the reason for circling a temple or crematory three times and also prostrating three times in veneration of the Buddha or a senior monk.

The ultimate truth
The intricacies of custom and tradition all too often cloud underlying meanings and purposes.

Contrary to popular belief, to understand the essence of Buddhism and benefit from its philosophy, practitioners do not have to be versed in ancient mantras and spells, nor do they need to seek the protection of a magical tattoo or amulet. In fact, many of the practices we see today are contradictory, if not irrelevant, to what Buddha actually taught.

The real point of Asaha Bucha day is to honor Buddha’s first and fundamental sermon, which explains that the Dharma Wheel – an analogy for our life cycle – comprises the “spokes” of birth, illness, death and rebirth.

The wheel turns relentlessly; life is a constant cycle of suffering caused by our desires, dependencies and attachments.

In order to break free from the cycle of pain and suffering that is life – not to be reborn again into the same cycle – and thus obtain the ultimate truth of enlightenment, detachment and renunciation of the unessential and harmful things in life must be practiced.

At the same time, it is important to avoid extremes and instead seek a middle path, willfully and consciously living by the basic five precepts: to abstain from killing, stealing, lying, drinking and sexual misconduct.

That said, Buddha is not a god to be worshiped, but rather a teacher to be honored.

Khao Pansa
The day after Asaha Bucha – this Friday, August 3 – is Khao Pansa, literally the “rains retreat”. This is the customary time for laymen to ordain as monks.

For this three-month period, monks traditionally retreat to temples because the rains make it difficult for them to meditate in the forest or ask for alms on a regular basis.

To ensure the monks are able to sustain themselves, laypeople make larger-than-usual offerings during Khao Pansa.

During Khao Pansa, monks stay in the temples, disciplining themselves by following hundreds of precepts which dictate that they abstain from everything, including growing eyebrows to even singing. This is in contrast to the five basic precepts that laypeople attempt to follow as outlined in the Buddha’s principle sermon.

Khao Pansa also sees an increase in social awareness through media campaigns on Thai TV, newspapers and radio. The most common of these is echoed in the nationwide alcohol abstinence slogan: “Khao Pansa Ngote Lao“.