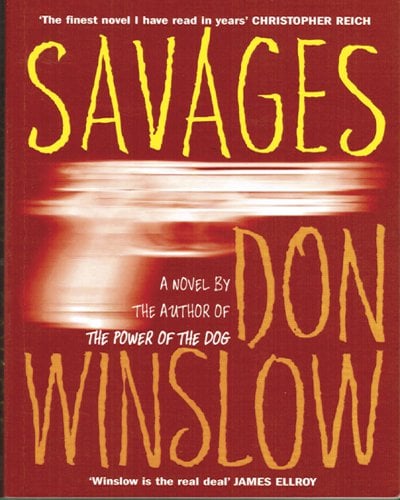 PHUKET: I picked up Don Winslow’s Savages (Simon & Schuster, New York, 2010, 358pp) with a good deal of eagerness, having just finished the much-lauded prequel The Kings of Cool, which impressed me with its zany energy, veering between screenplay,
poetic stanzas and wise-guy syncopated prose, deeply empathic with the surfer/grass dealer ethos of Laguna Beach, California.

Winslow is a wildly original stylist, willing to throw everything into a perpetually bubbling pot of invention. I hadn’t felt so excited since I first discovered the crime novels of Elmore Leonard.

At the novel’s heart are three lovable childhood friends – Navy SEAL Chon, philanthropist Ben and beach babe “O” (for Ophelia) who is in love with them both.

They grow and sell the best hydroponic marijuana buds in the nation, derived from a White Widow seed brought back by Chon from Afghanistan and honed to perfection by botanist Ben.

The savages are the thugs, lawyers and crooked cops of the Mexican drug cartel who want to take over their operation. They too get their narrative turn: Elena, the beautiful widow and ruthless cartel queen; Lado, the dead-eyed enforcer, ex-cop and double-crosser; Esteban, the young husband and apprentice gangster. As Mexicans, they see Americans as, “rambunctious rustics who just got on a lucky streak in the 1840s and rode it to steal half of Mexico”.

In Ben and Chon, Elena sees, “a smart, sophisticated, reasonable businessman with no stomach for bloodshed.

The other is an uncouth, foul-mouthed barbarian who seems to relish violence. In short, a savage.”

Chon’s view is that there are two worlds.

Ben outwits and Chon outguns the cartel until Elena orders Lado and his crew to kidnap O. Then the pair knuckle under to the cartel’s orders, or appear to, while they carry out Taliban-style ambushes to steal the drug cash needed to meet the cartel’s US$20 million ransom demand. Meanwhile, O passes that time away watching TV with the apprentice mobster Esteban while being viewed on CCTV by a sympathetic Elena.

The idealistic Ben is forced to cast off layer upon layer of civilized morality as Chon’s raids against the cartel become ever more complex, entertaining and murderous. Then they force a corrupt DEA agent to turn over the government’s entire computer file on the cartel. Ripped on speed, the two stare at the computer screen all night. Winslow’s bent, wayward, whimsical narrative continues:

“Dawn doesn’t ‘find’ shit – dawn’s not looking. (The only redeeming quality of the universe, Chon believes, is its indifference.)

“When the sun comes up they’re still there, pouring over the mass of material.

They find what they’re looking for: Elena’s own point of vulnerability.

“Elena will bring an army.

“Their chances of getting out are… How many ways are there to say zero?

No hope, no faith, no values, no future, no past.

The novel ends in a blaze of violence and then a sudden hot bath of mawkish sentimentality. The ending is so awful I can’t bear to quote it. It brings into disrepute everything that has gone on before.

How can an author so sure-handed fling out this steaming pile of mush as a finale?

When I first read Elmore Leonard, the king of crime writers, I felt, like Stephen King, that I wanted to read everything he had ever written.

This botched ending has quelled my yearning for anything more from Don Winslow, thank you very much. Savages is a cruel disappointment.

A kindle version is available from amazon.com.