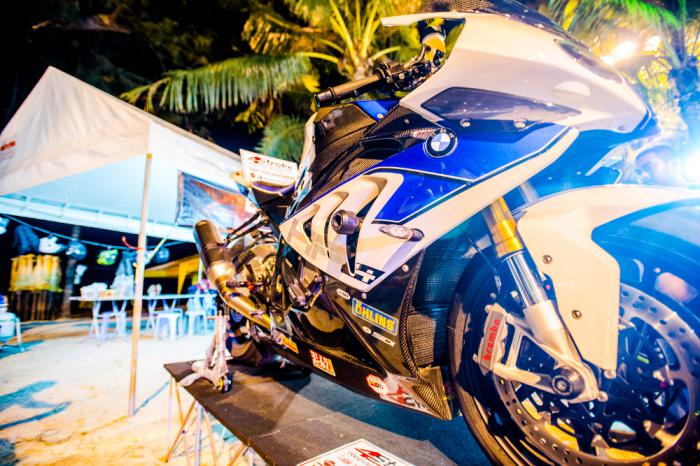 PHUKET: On April 11, Patong Beach welcomed thousands of motorcyclists and enthusiasts to Phuket Bike Week. With two decades of successful Bike Week’s under their belts, Phuket’s party-central has pulled it off again with a full schedule of activities amid a sea of bikes, babes and brews.

Hawker stalls lined the boardwalk north of the stage, offering everything from alligator heads, every type of leather clothing and accessories imaginable, Western and American Indian themed knick-knacks to Darth Vader helmets, motorcycle parts and accessories and, of course, motorcycles themselves.

As groups of dozens of big-bike riders poured in from all over Thailand and as far away as Vietnam, Malaysia and Singapore, Governor Maitri Inthusut took the stage to inaugurate this year’s Bike Week.

It was an extraordinary feast for the eyes and salivating motorcycle lovers were dripping with envy at the sight of burly BMW adventure bikes, rumbling chrome-covered Harley’s and high-revving racing sport bikes.

Phuket Town’s Four Stroke motorcycle shop had quite the display of tricked-out sport bikes ranging from a pair of primary colored Yamaha R1’s, twin dark and deadly 1,300cc Suzuki Hayabusa’s to the Union Jack’s pride and joy, a Triumph Street Triple and finally the 193 horsepower BMW HP4. A number of the bikes displayed were also for sale if you’re in the market for a fast machine.

Perhaps the true spirit of the event is credited to the American symbol of two-wheeled freedom – Harley Davidson. Harley’s were definitely not in short supply with examples of all shapes and sizes on show and models ranging back for decades. Enormous fairing-shrouded touring bikes sat beside low-slung hogs and custom choppers.

No self-respecting celebration of two-wheeled motoring would be complete without a generous helping of beautiful women – something soft and gentle to balance the brutal power and cold steel. Scantily clad models draped themselves over bikes to pose for photos and first-round contestants of Miss Phuket Bike Week gathered to let the crowd get an up close and personal sneak-peek.

Bike week will continue and conclude this weekend at Saphan Hin in Phuket Town. Final rounds of the custom bike competition and Miss Phuket Bike Week competition will take place as well as a motorcycle safety course and stunt show.