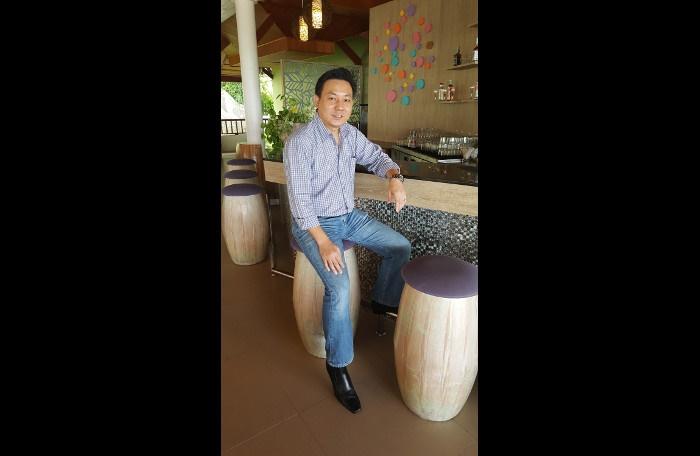 PHUKET: Bangkokian Naphatwong Niyomadul holds the prestigious title of Owner’s Representative at Centara Blue Marine Resort & Spa Phuket, operated by Patong Cliff View Co Ltd. Well, you could say he is entitled to it and has a vested interest in the resort, which his family established in 2002.

At age 36 years, Mr Naphatwong already has a wealth of experience under his belt. He is a successful businessman in his own right, a connoisseur of fine wines, and an Assistant Judge at the Region 8 Labor Court.

He studied at Assumption University in Bangkok and then went on to graduate from Queensland University of Technology in 2005 with a master’s degree in business marketing.

Armed with his qualifications from ‘Down Under’, Mr Naphatwong returned home and jumped into the role of a sales representative for his family’s resort.

The resort was the family’s first foothold in the hospitality industry at a time when the island’s tourism was really taking off, especially in Patong, where the family had a piece of prime land next to the sea.

The existing family business was already successful – the second largest plastics factory in southern Thailand – but it was time to diversify and develop the beachfront land.

Mr Naphatwong has added even more diversity to his family’s legacy with his own business ventures as the owner of Suppattra Travel & Tour and as an authorized dealer of Good Spirit Bangkok – an importer of boutique French wine and champagne to Krabi, Phang Nga and Phuket.

Despite his business successes, Mr Naphatwong says his best experience has been his appointed as Assistant Judge for the labor court, where he has a chance to help others resolve disputes.

“I’ve learned a lot about doing business over the years. There have been betrayals and lost opportunities, which have taught me to be more careful and to have more patience, but I also need to do something in return, for society,” he says.

Ultimately, though, Mr Naphatwong sees happiness as a mark of success.

“To me, the goal in business and in life is to have the support of family, friends and acquaintances, while being able to help others in need of support.”