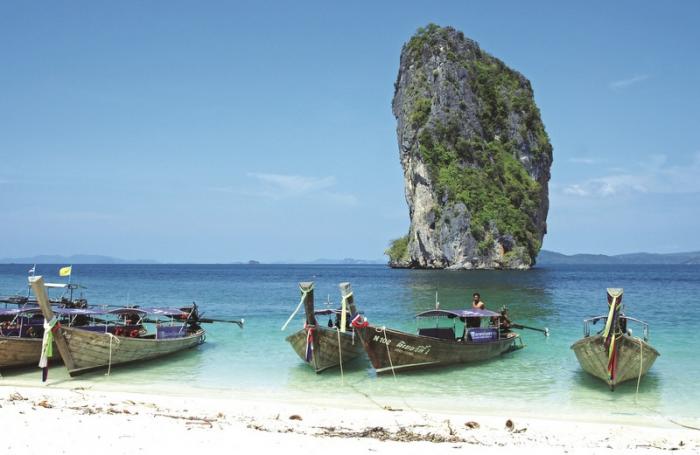 PHUKET: No, I’m not writing about boat size, as the title of this article may at first suggest. I am referring to space; specifically Phuket and its surrounds.

Phuket has the name, the fame – some may say infamy – and that cache and recognition is powerful for Phuket’s marine industry.

This ‘Brand Phuket’ has been built on the back of the island’s tourism industry, the engine that drives most other industries on the island.

Phuket’s marine industry, however, needs to look beyond ‘Brand Phuket’ and to define its own direction.

The Andaman Triangle of Phuket, Phang Nga and Krabi are together the draw card for marine tourism. Any boat travelling to Phuket from overseas rarely stays only in Phuket. They explore the surrounding islands, bays and coves, the most well known and stunning of which are in Phang Nga Bay and Krabi – Phi Phi, the Hong Group of islands, Railay and others.

Together, the three provinces of Phuket, Phang Nga and Krabi hold the allure to visiting yachts and also to charter guests and local boat owners. They are the calling card.

While Phuket is more often than not the jumping off point, an average seven-day boat charter itinerary will likely take in all three provinces (and perhaps more), so why aren’t we talking more about the three provinces?

The Andaman Triangle to anyone who lives in Phuket is an obvious concept, and to most charter and tour operators it is already promoted to guests, but for the industry at large its importance needs to be underscored.

Going beyond the Andaman Triangle, the Andaman region (north and south of Phuket) has such marine tourism potential but once a boat is away from Phuket and Krabi, there are limited onshore facilities.

Phuket is home to four world-class marinas, Krabi two, but head south and where is the next stop for a boat looking to berth securely? For a charter group or a private boat owner looking to cruise for an extended period of time, where do they go next? A few overnight stops on anchor – stunning as they are – and then it’s the Malaysian border and Langkawi Island – Malaysia’s rival to Phuket.

It’s time for Phuket’s marine industry to boldly go… to think big and go long. With the sole attention on Phuket, industry growth will stagnate (some may say it already has), but to take a bigger view, to co-operate with surrounding areas and to jointly promote the Andaman Triangle both offshore and onshore, will reap benefits for all.

In addition to private sector support, there is an opportunity for the Tourism Authority of Thailand (TAT) here. Having produced a rather pretentious ‘Amazing Thailand Luxury: Where Life Rules Everything’ video last year that shows cigars, alcohol (advertising of which is banned/ restricted within country), and much more (including some luxury boating snippets), perhaps the TAT could direct some finances to promoting yachting as a whole and the Andaman Triangle in particular.

It’s a product worthy of promotion – not just the cruising grounds but the onshore facilities too. It already has strong appeal and recognition that could be helped further with some public sector marketing support.

Showcasing the great cruising grounds accessible from Phuket and supporting further growth of onshore facilities in Phang Nga, Krabi and beyond – be it onshore services, shoreside support, charter operations or marina development – will reinvigorate the industry and produce tangible results for all.

Duncan Worthington is a long time Phuket resident and through Infinity Communications (infinity-comms.com) consults to leading consumer brands, hospitality and marine clients in Thailand. In his ‘spare time’ he runs the marine portal MarineScene.asia. #OnDeckPhuket