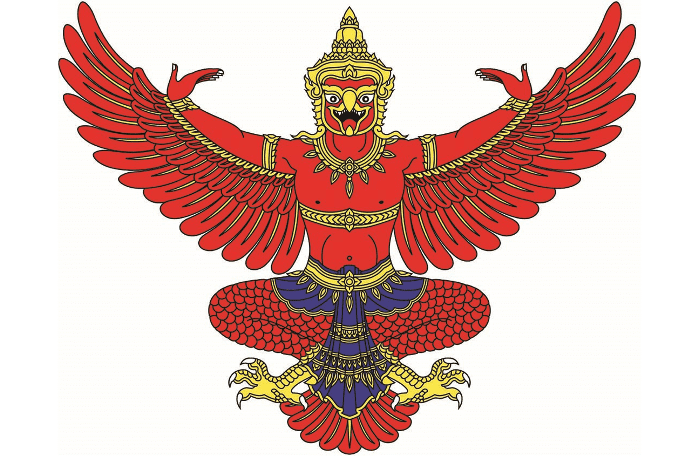 PHUKET: The Garuda is a common symbol in Thailand. It can be found on bank notes, government documents and official flags, as well as government and private offices.

The emblem of the Thai government is a frontal image of the Garuda in red, adopted in 1910 during the reign of King Rama VI.

The legend dates back thousands of years, originating in ancient India. According to folklore, the Garuda is half beast, half god. He has eagle-like characteristics, with large wings, sharp talons and a sharp beak affixed to a human face. He possesses human arms and upper body, whereas his lower body resembles a large bird with a feathery tail.

The Garuda has unfathomable power. It is said that his wings are capable of creating gusts of storms, and that he is able to fly high above the clouds and soar swiftly. However, he is also wise, gentle and respectful.

The Garuda is often depicted with Narayana, who, in Hindu scriptures, is one of the most important of the Brahman gods. According to legend, Narayana made a bargain with the Garuda – in return for immortality, the Garuda promised to become Narayana’s mode of transport. Narayana would ride on his back as he flew across the heavens.

It is this story that connects the Garuda to Thai tradition. Thais have always believed in the divinity of their kings. During the Ayutthaya period, it was believed that the king was a god incarnate, descended down from the heavens to serve mankind.

The idea of divinity of kings could be traced back to India. According to ancient Indian scriptures, Narayana had reincarnated as many as nine times, each time taking a different ‘Avatar’, in order to banish evil and fight tyranny. In the ancient Indian epic Ramayana, King Rama is mentioned as being the avatar of the god Narayana. In the Mahabharata, Krishna was believed to be an avatar of Narayana. Even Buddha is believed by Hindus to be the ninth reincarnation of Narayana.

Since the Ayutthaya period, Thais also believed that their kings were the incarnation of the god Narayana. Although it was a symbolic interpretation, it was a powerful one. The king was divine, sent to rule his subjects on earth and alleviate their suffering. His authority was heaven’s mandate.

During the Rattanakosin era, Thai kings of the Chakri dynasty continued this interpretation. Chakri kings assumed the title ‘Rama’, after Narayana’s avatar in Ramayana.

King Rama V ordered the design of a new emblem of government. The initial design of the national emblem, drawn by Prince Naris in 1893, showed Narayana riding on the Garuda. The final version featured only the Garuda.

Today the Garuda flag is flown above Royal residences to signify the King’s presence, as well as in front of Royal vehicles. It is also mounted under every portrait of the King and Queen.

In the year 1996, a royal barge was launched to become the seating barge for King Rama IX. The barge was named ‘Narai Song Suban’. The bow depicts Narayana mounted on the Garuda.

Private businesses may be granted the use of the symbol if they are deserving and of good standing. If permission is given, the firm may hang a sculpture of the Garuda on all their business premises, or print the Garuda symbol on their merchandise.

Receiving a Royal Warrant is considered a great honor and a mark of distinction for any Thai company.

Excuse Buster: Getting your kids to eat more vegetables