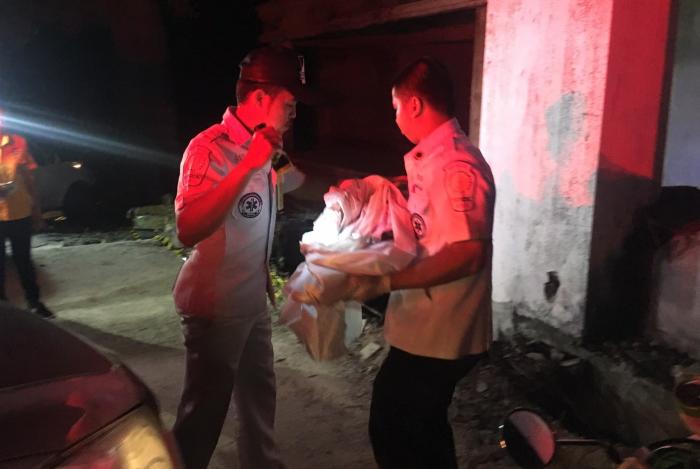 PHUKET: A young father and his 11-month-old baby were found hanging at an abandoned construction site for a hotel in an apparent murder-suicide in Nai Thon last night.

Thalang Police were contacted by 21-year-old Jiranuch Trirat earlier in the evening asking for help to find her husband and daughter, who had both disappeared from their house in Baan Mood Dok Khao.

Thalang Police then referred the case to Sakoo Police.

“We found Wuttusan Wongtalay, 21, and his daughter Natalee Wongtalay, hanging from a 10-meter-high wall at [the partially completed construction for a] Peninsula Hotel,” said Capt Jullaus Suvannin of Sakoo Police.

Ms Jiranuch’s uncle, Suksan Buachanit, said that before Mr Wuttusan left, the couple quarreled, during which he tried to choke his wife and asked “How should I kill you?”.

At about 5:45pm, Mr Wuttisan, using his Facebook account under the name of ‘Tonkla Ja’, posted a four-minute live video of the horrific incident.

“The clip showed the screaming baby while her father attempted to kill her by hanging. The baby eventually went quiet, after which Mr Wuttisan hung himself. We urge netizens not to share the video, as it is very disturbing,” Capt Jallaus told Phuket Gazette reporters.

Both father and daughter were officially reported dead at about 8pm.

The captain also stated that police will investigate the cause of the murder and suicide separately.

Both bodies were transferred to Thalang Hospital.

The incident also caught the attention of Phuket Governor Norraphat Plodthong, who expressed his condolences and said the government would extend financial support to the family, if needed.

“This tragic incident reflects the weakness of the family institution. Citizens should consult and support each other to solve problems in order to prevent such incidents in future,” said Governor Norraphat.