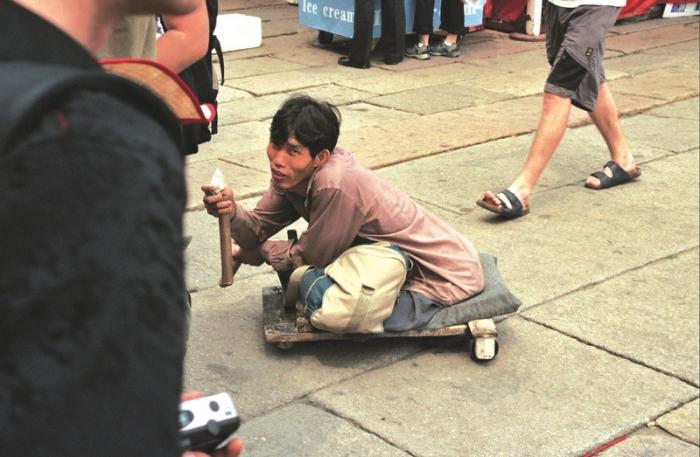 PHUKET: The Thai government recently passed a law revising the country’s rules on begging in public areas. The law replaces the Beggar Control Act of 1941, which punished gangs and individuals for trafficking in people to work as beggars. People who wish to beg for money on the streets are now required to obtain licenses to do so. This not only applies to destitute women with hungry children, but also to buskers and street performers blocking public footpaths.

The law also provides that genuinely poor beggars or elderly Thai citizens who do not have any means of assistance are transferred to a welfare facility and would not be charged with a crime. Non-Thais and children found begging are dealt with under existing immigration and child welfare laws.

In a nation filled with Buddhist temples and generous people, I do not see begging as a major issue, except for areas frequented by large numbers of foreigners. It is rather distressing to see the same woman holding a sleeping baby, or a man without legs lying flat in the middle of the sidewalk, begging for money. I occasionally see homeless men, who probably have some mental problems, but their circumstances are different. Do I give them money? No.

I expect that most of them are placed there every morning and picked up every night by organized criminal gangs. As long as those gangs continue to profit from the beggars, they will continue trafficking people into the city, including children.

Chapter 3 of the Child Protection Act 2003 says that young children used as props for begging must be removed. The act states that the government has a duty to protect the welfare of children by providing assistance or placing them in protective care.

There are some individuals who do not have a means of keeping a permanent job because of physical or mental impairments. These people can fall through the gaps in the welfare system but NGOs and charities such as the Thailand Association of the Blind and the Thai Disabled Development Foundation are there to assist them with physical and mental impairments. The law also provides for government assistance in getting them registered for welfare.

I do not see homeless beggars as a major problem here. Thailand has a strong social safety net of families and Buddhist temples to assist those in need. However, for those homeless living on the streets, the new law will help significantly to reduce their numbers and provide them a pathway to help.

There’s definitely a Biblical verse, a Confucian riddle or a Buddhist proverb about the futility of handing a paper ordering the recipient to hand over money to someone who is himself asking for money. This is not a problem unique to Thailand, nor are the ways in which the problem is being handled. We often hear that ‘they’re not real beggars,’ or ‘they’re being controlled by bad people’.

I actually mostly agree with that, but let’s just look at those two possibilities.

Saying that they are not real beggars alludes that they’re either secretly rich or simply that they’re not lacking – they’re doing this as a job.

In that case, I suggest you sit with them for a whole day and start counting the money they make. Does it feel like a real job? Would you like to apply?

They spend 12 to 15 hours in the sun, literally throwing away their pride and dignity while every one who passes by stares at them in disgust. If they can ‘make a living’ through such an ordeal, then they deserve the amount of money they get – begging might just be a job after all.

Beggars being controlled by bad people is most likely often true, but that’s just an easy way to dismiss the problem. It is as if the very fact that the beggars are controlled by a shadowy group, more powerful than you or I, means nothing can be done – and we should just accept it. If they are only pawns in a bigger game of chess, then how can jailing beggars help in any sort of way? If the shadowy group is powerful enough to control the racket, they’re probably smart enough to find new pawns when required.

You can believe that they are being used, just be sure to be outraged when laws are enacted and decisions are made that hurt the abused rather than the abusers.

In any modern society, there are problems to be confronted and rectified, and street beggars are an issue for both rich and poor countries. There are many perspectives on the best way to assist those who live on the streets. We would love to hear your ideas about solutions.

Robert R Virasin is a licensed US Attorney and managing director of Virasin & Partners. Bruno Roussel is the head of the games department at the SAE Institute and dabbles in humanitarian causes. Robert Virasin can be reached at info@virasin.com or at virasin.com.