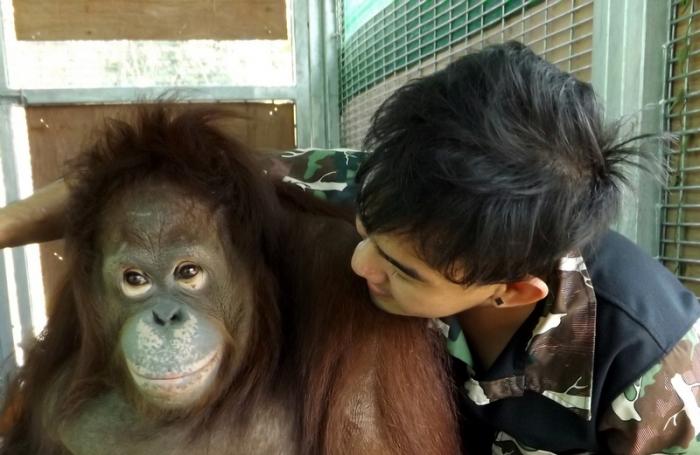 PHUKET: The recent brouhaha about Phuket Zoo’s ‘missing’ orangutan highlights – as every high profile incident does – Thailand’s patchy record with regard to wildlife conservation and care. The facts of Milo’s case are all too familiar to naturalists. Suffice to say that when the primate’s presence in the Phuket Zoo was questioned by animal-rights activist Vicki Kiely, the 13-year-old female orangutan abruptly disappeared before any official and redemptive action could take place.

According to the zoo spokesman, Milo had been “released into the wild” in a non-hunting zone. But the next day, police officers discovered her, locked in a tiny cage in the jungle and almost too weak to walk. Happily, Milo is now headed to a sanctuary in Ratcha Buri. Unhappily, the zoo has disclaimed any responsibility.

Milo the orangutan was just one of many endangered animals being abused as photo props for tourists. Video: PGTV

The case draws attention to the treatment of captive animals held in unnatural conditions everywhere, but especially here in Thailand. Orangutans, critically endangered, have long been a matter for concern in Southeast Asia where the recent man-induced bush fires in Sumatra and Borneo destroyed much of the creatures’ habitat, and with it the lives of affected individuals. Add to that poaching and the depletion of rain forest due to mono-culture crops such as oil palm, and the estimated population of 70,000 orangutans in the wild is probably far too high.

Apart from loss of territory, the principal reason for the disappearance of wildlife, especially in Asia, is the insatiable demand for their flesh and organs, both as pointless aphrodisiacs and as exotic additions to restaurant menus. It is a melancholy catalogue: many millions of sharks every year for shark-fin soup, the extirpation of the Sumatran tiger, the massive decline of Thailand’s population of pangolins and tokay geckos, all destined for Chinese dinner-tables, or the dwindling numbers of many bird species, from majestic vultures and eagles to dainty baya weaver birds.

Even further down the chain of being, is apis florae, the dwarf honey bee. A tiny bee found in Thailand, it constructs a wondrous, single comb oval nest that is literally suspended from a tree branch. Key pollinators and crucial to the region’s horticultural industry, these bees need all our TLC. But they rarely get any protection. Either the fragile nests are raided by the predatory weaver ant – as happened recently to the colony in my mango tree – or, if spotted by locals, they are knocked to the ground and the entire colony destroyed – all for the sake of a few ounces of honey.

Nothing, it seems, is either too big or too small for man, the arch-predator, to victimize.

If you have gardening or environmental concerns, contact Patrick at drpaccampbell@gmail.com. Many of his creative and academic publications can be found on his website: Green galoshes WordPress.

Books: Our Man in Phuket – Autobiography of Alan Cooke