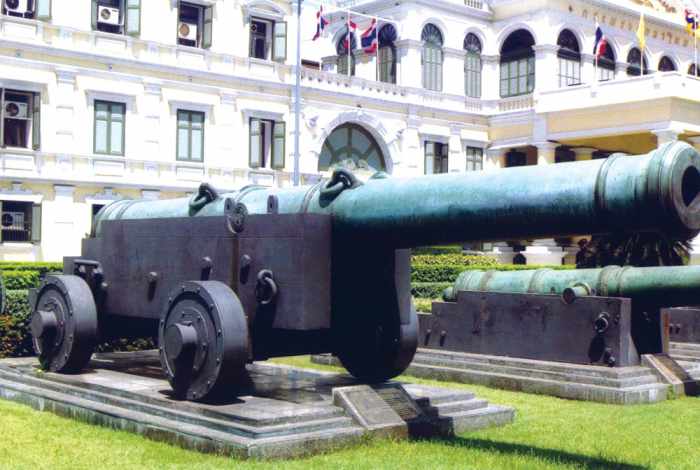 PHUKET: The Thai Ministry of Defence is located opposite the Grand Palace in the old part of Bangkok. What is interesting about this government building is its large collection of old cannons, which are exhibited within the courtyard parallel to the main road. The cannons date back to various periods in Thai history and range from small guns to intimidatingly large bombards. Each cannon has its own story. Many of them were present in various wars that have shaped the history of Thailand.

Of the 42 cannons parked outside the ministry building, a large bombard called the Phaya Tani probably has the most interesting story to tell. Dating back over four hundred years, the Phaya Tani is the largest cannon in the collection. The sheer size of the magnificent weapon seems to dwarf the rest of the cannons that surround it.

It is said that the Phaya Tani was cast in the old kingdom of Patani Darussalam. Although today Patani is a province in the south of Thailand, during the 17th century it was an autonomous Muslim sultanate. In the beginning of the 17th century, a succession crisis in the Patani royal family paved the way for the first queen, Raja Hijau to ascend the throne of Patani. After Raja Hijau, three more queens ruled Patani successively, ushering in a brief period of peace and prosperity that lasted for 67 years.

Patani, being a small state, had always struggled to preserve its independence. To its north was Siam, a regional power with Ayutthaya as its capital city. Ayutthaya laid claim over a vast area of land that stretched from Chiang Mai in the north to Cambodia and Laos in the east. Its hegemony also stretched far south into the predominantly Muslim Malay Peninsula. However, because the Malay states were so far away from Ayutthaya, the capital often found it hard to assert its claims over these semi-autonomous sultanates.

The four queens foresaw the need for strong defenses in order to maintain Patani’s independence. Due to the constant threat of attack from Siam and its allies, the rulers built impressive forts and defenses around their city-state. They also invested in large cannons that could effectively repel enemy attack when fired from the city’s walls. The Phaya Tani was one such weapon and perhaps the only one that survives to this day.

The casting techniques evident in the cannon hints that it was produced locally and not imported from somewhere else. Made out of bronze, the Phaya Tani cannon is exceptionally large. The barrel is 6.82 meters long, with a caliber of 24 centimeters. On the barrel’s hind is an engraving of a lion, an inscription that says ‘Phaya Tani’ and instructions on how much gunpowder needs to be loaded from the mouth of the gun.

In the year 1785, the Burmese attacked Siam once again, this time with nine armies that spearheaded into the different regions of Siam. King Rama I ordered his younger brother, Prince Maha Sura Singhanat to lead Siam’s defenses in the west and south. The prince was an experienced general and although the Siamese forces were inferior to the enemy, they managed to inflict heavy casualties on the Burmese. By 1786 the Burmese were forced to retreat from Siam.

After his victory against the Burmese in the Nine Armies War, Prince Sura Singhanat marched his armies further south of Siam to the gates of Patani. His aim was to subjugate the kingdom and bring it back under Siam’s hegemony. This time, Patani’s defenses were no match for Prince Sura Singhanat’s soldiers and the city fell to the Siamese attackers.

Historical records revealed that during this conflict, the Siamese captured two massive cannons. In order to weaken Patani and discourage them from rebellion, Prince Sura Singhanat ordered the cannons to be taken back to Bangkok. Of the two cannons captured, only one, the Phaya Tani reached Bangkok safely. The second cannon, named ‘Sri Negara’, according to the chronicles of Patani was lost when the ship carrying it sank in the open ocean. Some sources say it came loose when being loaded onto the ship and fell into the sea.

According to this chronicle, there was also a third large cannon named Maha Lela. This cannon, however, was never captured and no other historical evidence confirms its existence. Some historical documents suggest that it may have exploded during a battle against the Siamese under Prince Sura Singhanat’s command.

The Phaya Tani arrived in the capital in 1786. Prince Sura Singhanat presented the weapon to his brother King Rama I. The king was especially impressed by the sheer size and firepower of the Phaya Tani. He ordered the refurbishment of the cannon. The king also commissioned the casting of a second cannon of similar size that could be stationed with the Phaya Tani. This second cannon was named the ‘Narai Sangharn’. Both cannons were stationed within the Grand Palace for many years before being moved to its present location in the courtyard of the Ministry of Defense.

Nowadays, the Phaya Tani is highly revered by the Thai armed forces. Each year military commanders, led by the defense minister gather in a solemn ceremony to pay respects to the cannons, especially the Phaya Tani. Some believe the cannon still has mystical powers that continue to affect the country’s fortunes today. For many years the cannons had been facing the Royal Palace, but General Aud Bueangbon, then permanent secretary for defense moved all 42 cannons so that they faced Wang Saran Rom Park and the City Pillar Shrine instead.

Later in January 2004, an armed robbery was carried out on a military camp in Patani. After that a wave of unprecedented violence swept the far southern region of Thailand. In March 2004, General Chettha Thanajaro, then defense minister gave an order to readjust the Phaya Tani cannon once again in a belief that the superstitious tactic would ward off evil and curtail violence in the three southern provinces that made up the former Patani kingdom.

In June 2013, the Thai government installed a replica of the Phaya Tani cannon in front of the historical Krue-Se mosque in Patani province. A few days later the replica cannon was bombed and damaged by insurgents.