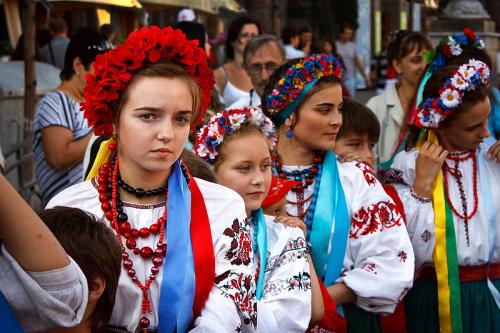 PHUKET: With all the Russian writing on Phuket signs and in beachside restaurants’ menus, you might think that there are many Russians in Phuket…and you wouldn’t be wrong. But keep in mind that not all of them are actually Russians.

With some 30,532 Ukrainians having visited Thailand since the beginning of this year, chances are that the Russian family you see sunbathing on your favorite beach is actually a Ukrainian family.

They might be easier to spot today, Saturday, August 24, when Ukraine celebrates its Independence Day. So if you lacked an excuse to raise a glass on that very day, there you go! And to make it a bit more meaningful, here’s a profile of the third largest country in Europe.

Ukraine is located in Eastern Europe and share its border with seven countries – Russia, Belarus, Poland, Slovakia, Hungary, Romania and Moldova and the Black Sea in the south. Approximately 45 million people live in Ukraine, 77.8 per cent Ukrainians, 17.3 per cent Russian and 4.9 per cent make up other nationalities.

Ukrainians celebrate their national day on August 24 to commemorate the county’s independence from the USSR. The Ukrainian Declaration of Independence was adopted by the Ukrainian parliament on August 24 1991, three months before the official dissolution of the Soviet Union. Today the celebrations consist of fireworks and concerts that are mostly concentrated in the capital – Kiev.

The Ukrainian flag consists of two horizontal stripes, blue over yellow, representing fire and water, golden domes of churches over the Dnieper river (for a short period in the 20th century the colors on the flag were placed in the opposite order), or blue skies over fields of wheat (above). Since 2004 August 23 is celebrated in Ukraine as the day of the national flag.

The official language of Ukraine is Ukrainian, named the native language by approximately 65 per cent of the population with Russian coming second at roughly 30 per cent. Many Ukrainians use both Ukrainian and Russian in equal measure. State-controlled media use exclusively Ukrainian but private media, mostly printed press and radio, is still dominated by Russian.

Ukraine is famous for its borsch, a soup made from beetroot and 20 other ingredients. Other popular dishes are: Varenyky, dumplings similar to Polish pierogi with stuffing such as mashed potatoes with mushroom and fried onions, cabbage, minced meat or even cherries. Uzvar, a drink made from dried apples, pears and apricots.